MEET US AT THE DCAT

CASPASES AS REGULATORS OF APOPTOSIS

Apoptosis, also called programmed cell death, is an essential physiological process of cellular autodestruction. It plays important roles in development, maintenance of cell homeostasis, and host defense in multicellular organisms [1]. Unregulated cell death is involved in a number of clinical disorders. Excessive apoptosis can lead to neurodegenerative diseases and ischemic injuries, whereas cancer and autoimmune diseases can result from insufficient apoptosis [1, 2]. Diverse cell types can be triggered to undergo apoptosis by a variety of physiological and pathological stimuli, derived from either the extracellular or intracellular milieu [2]. Cells undergoing apoptosis exhibit a series of characteristic morphological changes, including chromatin condensation, plasma membrane blebbing, cell body shrinkage and disassembly into membrane-enclosed vesicles (apoptotic bodies), which in vivo are quickly eliminated by phagocytosis [1-3]. Thus, cellular constituents are not released from dying cells, and no inflammatory response occurs [1, 2]. This is one essential feature of apoptosis, which distin-guishes it from necrosis [4].

The central component of this machinery is a proteolytic system involving caspases (cysteine-dependent aspartate specific protease) [5]. These proteases have high specificity for substrates containing an aspartic acid residue, and use a cysteine side chain as a nucleophile during peptide bond hydrolysis [2]. Caspases are key players in apoptosis, and their activation is generally considered as the “point of no return” in apoptotic pathways [6]. To date, 18 mammalian caspases are reported, although this number is influenced by inconsistencies in the nomenclature. Examples for apoptotic caspases are caspases -2, -3, -6, -7, -8, -9 and -10. Inflammatory caspases include caspases -1, -4, -5, -11 and -12 [7]. Caspases are synthesized as latent precursors or procaspases with the general organization shown (Figure). All procaspases contain a highly homologous protease domain, which can be further divided into two subunits [1]. In some procaspases the subunits are additionally separated by a short interdomain linker. Each procaspase also contains a prodomain or NH2-terminal peptide of variable length [1]. 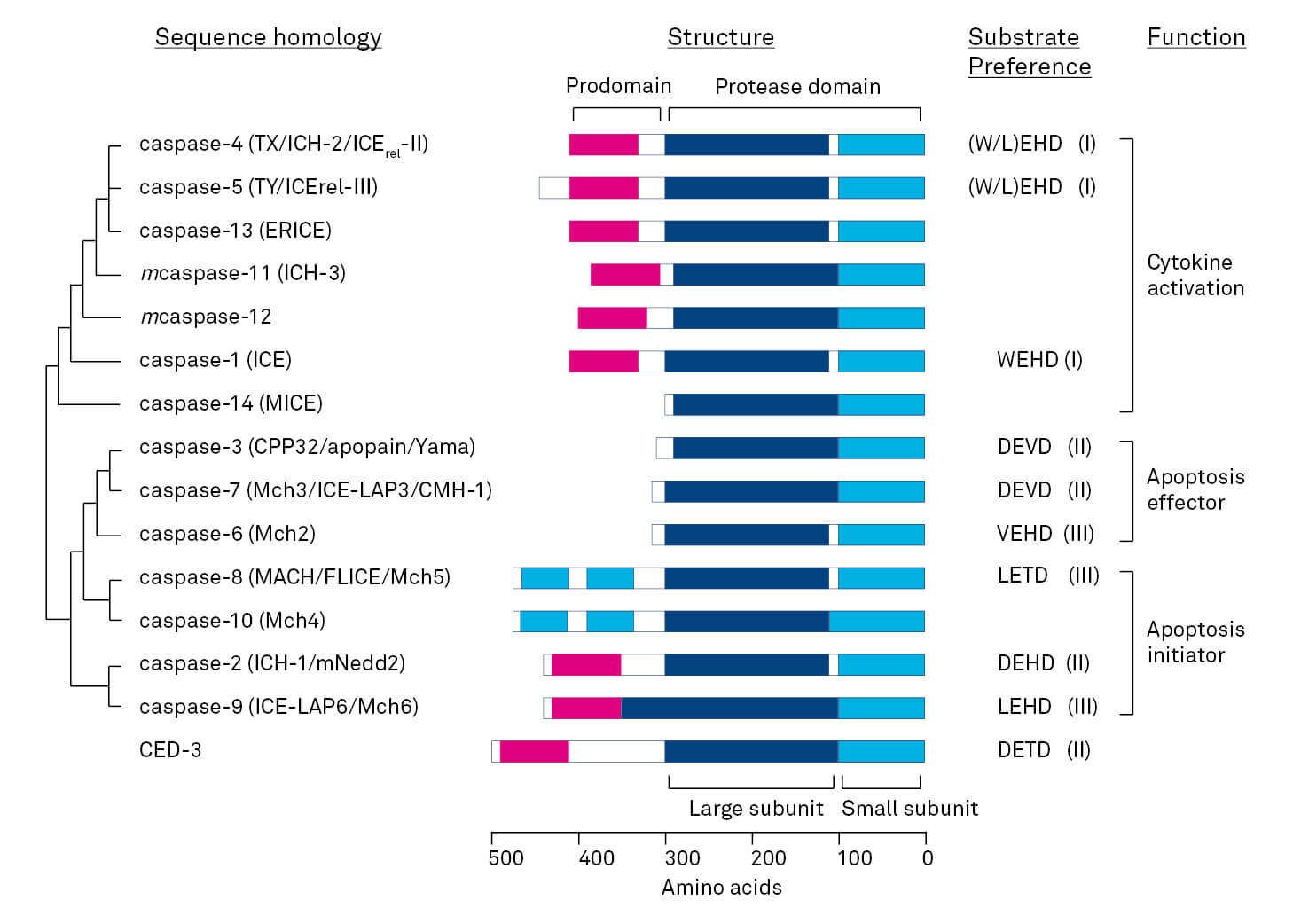 Amarantus BioScience is developing AMRS001, a growth factor known as mesencephalic astrocyte-derived neurotrophic factor (MANF). The lead indication for AMRS001 is retinitis pigmentosa and other indications include Parkinson’s disease, Wolfram’s syndrome, diabetes and retinal arterial occlusion (3). MANF has been granted Orphan Drug designation for the treatment of retinitis pigmentosa from both the US Food and Drug Administration and the European Medicines Agency (2). Celtic Biotech Iowa, a subsidiary of Spotlight Innovation, is developing Cardiotoxin, a membrane-disruptive peptide from Naja naja atra venom, for the treatment of chronic kidney disease (CKD) and cancer. This cobra venom peptide is a Caspase-9 activator. Positive preclinical study data has been published showing that Cardiotoxin has the ability to reduce the effects of CKD (4). CVXL0103 is a cell-penetrating peptide and caspase-9 inhibitor that induces apoptosis. This peptide was in preclinical studies for the treatment of her2-negative breast cancer and ovarian cancer by Clevexel Pharma SAS. No recent development has been reported by Clevexel Pharma and the product’s status is currently unknown (2). F573 is a dipeptide caspase inhibitor in preclinical development. GNI Group and its subsidiary, Shanghai Genomics, are developing this dipeptide for the treatment of acute liver failure. In 2011, Shanghai Genomics filed an IND for F573 in China. In 2012, GNI Group published results from a research study in mice concluding that F573 had a therapeutic effect on mice with acute liver injury (2). PEP-010 is being developed by PEP-Therapy for oncology indications. This 30-mer peptide contains DPT, a shuttle sequence that delivers the active peptide into the cell and an interfering active peptide sequence that blocks caspase-9/PP2A interaction. Preclinical studies showed that PEP-010 induced death in human tumor cell lines and in B-cells of patients with lymphocytic leukemia without affecting healthy cells. As a next step, the PEP-Therapy plans to initiate toxicity studies (5).

VRCTC310 contains the snake venoms crotoxin and cardiotoxin. Celtic Biotech Iowa, a subsidiary of Spotlight Innovation, is developing VRCTC310 for the treatment of hematological cancers and pancreatic cancer (2). The company is preparing for Phase II studies and plans to submit an IND for VRCTC310 to the US Food and Drug Administration in 2017 (4).

Neuren Pharmaceuticals is developing a peptide product candidate, designated NNZ-2566 (trofinetide), for Rett syndrome, Fragile X syndrome and traumatic brain injury. This candidate is a synthetic analog of glypromate, a neuropeptide derived from insulin-like growth factor-1 (IGF-1). In 2015, Neuron reported results from Phase II trials in Fragile X syndrome in which improvements were seen across the core symptoms of Fragile X syndrome. In 2016, Neuron announced that it started a Phase II trial in children and adolescents with Rett syndrome, a neurological disorder. The US Food and Drug Administration and the European Medicines Agency have both granted Orphan Drug status to trofinetide for Rett Syndrome. In addition, the FDA has granted Fast Track designation to trofinetide (2).

The development of therapeutics that target caspases has been of great interest and caspase inhibitors and substrates have been used to help define the role of caspases in apoptosis and other biological processes. To assist researchers and organizations that are active in this field of research, Bachem offers 85 different caspase inhibitors and substrates from stock at shop.www.bachem.com. In addition, comprehensive custom peptide synthesis services and the production of peptide-based New Chemical Entities are offered.

How long have you been with Bachem? Where did you work before Bachem?
I joined the project management team at Bachem in August 2015.

At Bachem I’m leading several customer-related development project teams from first ideas to market approval and beyond. It is my responsibility to ensure the progress of the project. Together with our interdisciplinary teams we seek solutions to complex issues in order to create value for our customers.

I studied Biology in Regensburg and did my PhD in Molecular Biology/ Epigenetics.

In my spare time I like to do Yoga, go skiing and play Volleyball. I also love to read, good food and travelling the world.

How big is the PM team at Bachem and how are they set up?

We are a young team of 13 project leaders. PM is integrated into the Business Development & Sales department and located in the TIBA area at Bachem Bubendorf.

A perfect day includes sunshine, a good book and a cup of coffee.

As a project leader I enjoy working on creative solutions with my project teams in order to successfully manage the project and meet customer expectations.

For me one of the most important aspects of a desirable job is a good team atmosphere with my colleagues. This expectation has been by far exceeded.

Thank you very much Sandra. 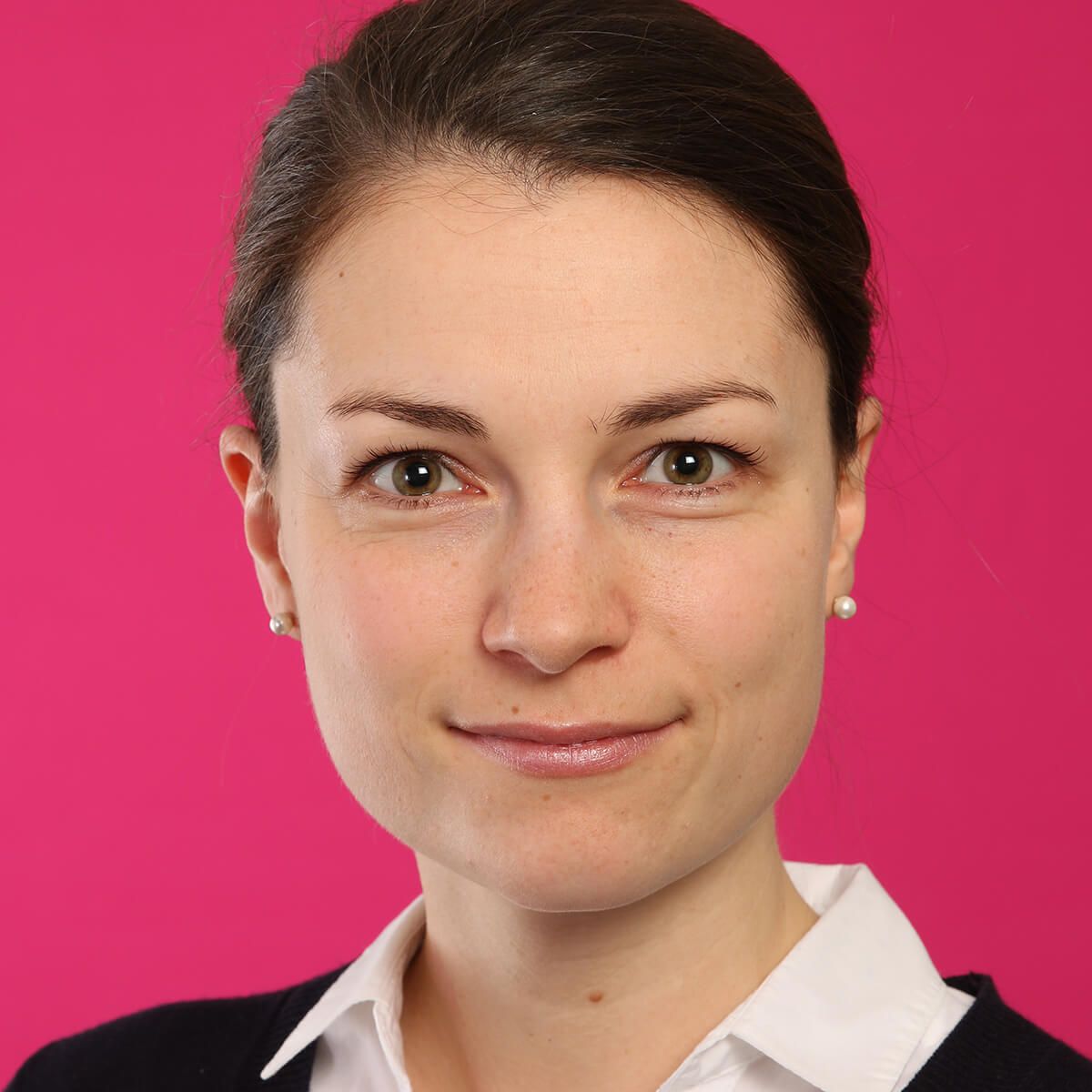