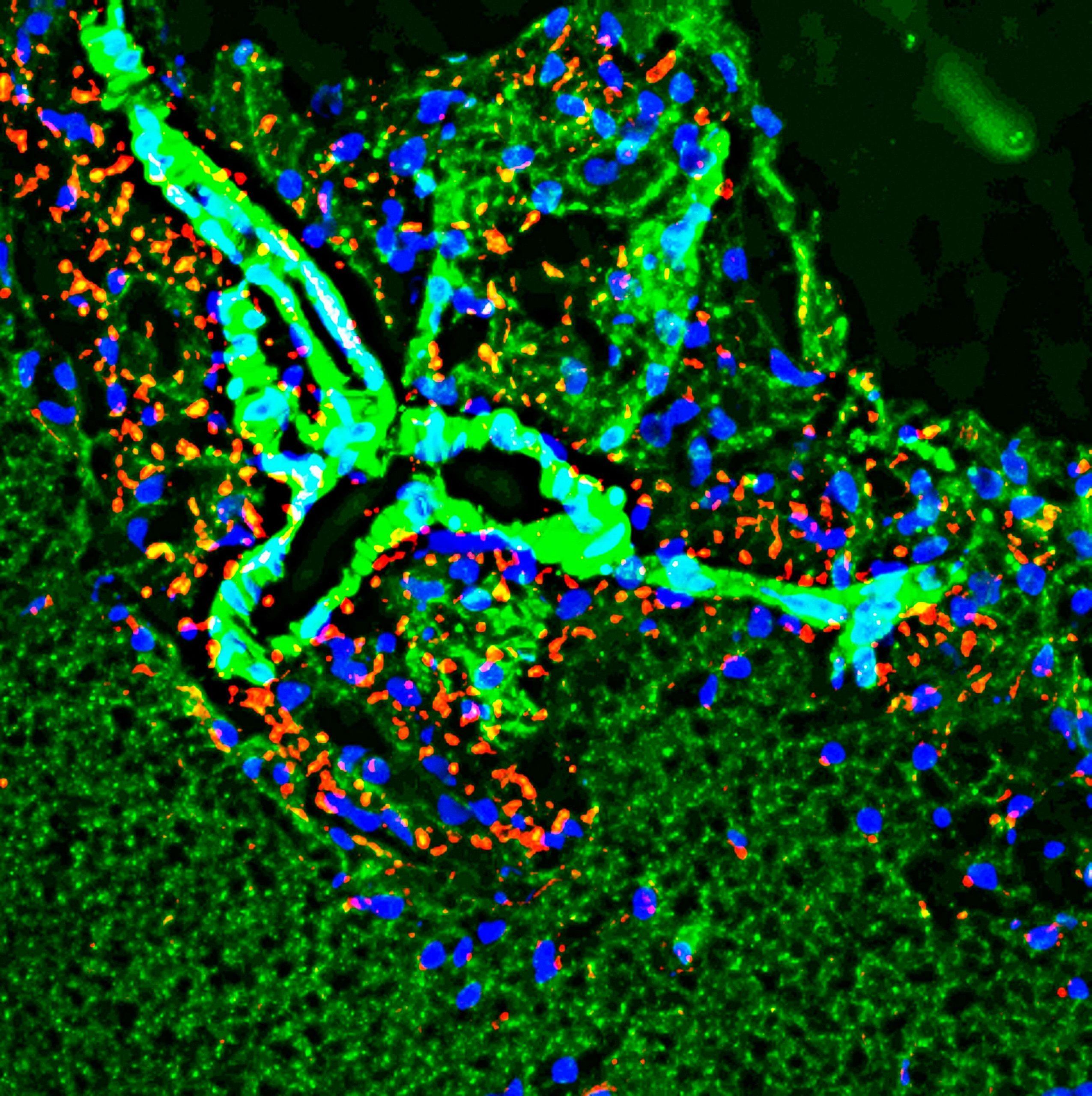 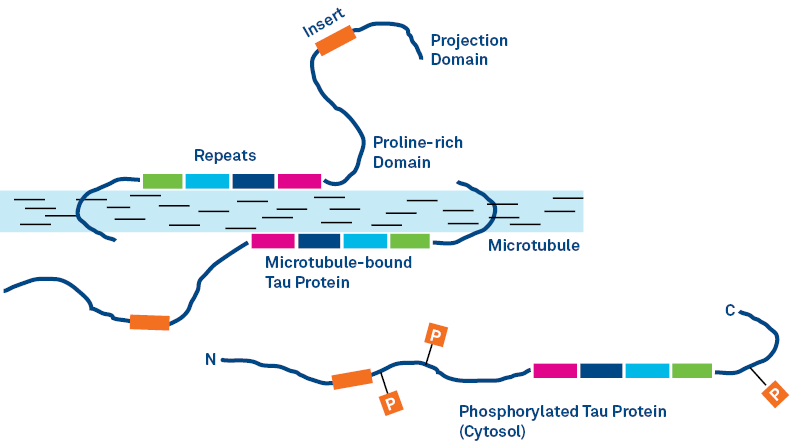 Tau protein is a dipolar molecule. Its N-terminal region contains a large proportion of acidic amino acid residues, whereas the proline-rich middle part and the C-terminus are dominated by basic amino acids. The distribution of charges can be changed under pathological conditions. Tau exists in six major isoforms differing in number of tubulin-binding domains and varying in size from 352 to 441 amino acid residues. The short isoforms allow plasticity of the cytoskeleton whereas the longer ones may preferentially play a role in its stabilization. In adult human brains, the six isoforms can be found whereas in fetal brains, only the shortest isoform is expressed.

Knowledge auf tau and its functions could lead to promising therapeutic approaches tackling the neuropathological effects of either aberrant tau modification or β-amyloid aggregate formation. This gives rise to hope that an effective cure for AD will be developed in the foreseeable future.

In Alzheimer’s disease (AD) and related neurodegenerative diseases known as tauopathies, the protein tau is abnormally hyperphosphorylated and aggregated, leading to neurofibrillary degeneration (1). Tau pathology coincides with the start of AD symptoms making it an interesting target. Treatment strategies targeting tau may offer an advantage over those targeting amyloid because tau hyperphosphorylation occurs later in the disease progression compared to amyloid-beta deposition, which begins before the onset of AD symptoms. This raises the possibility that tau-targeted drugs could be administered after the onset of AD symptoms and still have efficacy. In recent years, commercial interest in tau as a drug target has been growing with several companies entering candidates into clinical trials (2). Several tau-based drug candidates are shown in Table 1.

The most advanced candidate is LMTX® (methylene blue), an orally delivered small molecule under development by TauRx Therapeutics. LMTX acts as a neuroprotectant and inhibits tau hyperphosphorylation, dissolves tau aggregates and prevents tau aggregation. In 2016, TauRx completed two Phase III clinical trials in AD and another trial in behavioral variant frontotemporal dementia. The primary endpoints for the trials were not met but TauRx saw encouraging data from subjects taking LMTX as a monotherapy. The results also suggested that LMTX administered at a dose as low as 8 mg/day may be useful. The company plans to initiate further clinical studies in order to build on these study results (4).

Axon Neuroscience SE is developing AADvac1, a vaccine containing a peptide fragment, amino acids 294 to 305 of the tau sequence, coupled to KLH. The vaccine is designed to stimulate patients’ immune systems to attack dysfunctional tau proteins and thereby stop the progression of AD (5). In 2017, Axon Neuroscience completed enrollment for a Phase II trial of AADvac1 in AD. The main objective of the study is to evaluate the safety and tolerability of AADvac1 in patients with mild AD. The company also announced that it initiated a Phase I study with the vaccine in patients with non-fluent variant of primary progressive aphasia, a subgroup of frontotemporal dementia (2).

In 2017, Biogen licensed BMS986168, also known as BIIB092, from Bristol-Myers Squibb. BMS986168, an antibody and tau protein inhibitor, is under development for the treatment of progressive supranuclear palsy and neurodegenerative disorders. Biogen has already started a Phase II study of BMS986168 in patients with progressive supranuclear palsy. The company is also planning a Phase II study that will start enrolling patients with AD in 2018 (3).

Posiphen® (phenserine tartrate) is a small molecule under development by QR Pharma. It acts by reducing tau hyperphosphorylation as well as inhibiting the synthesis of amyloid precursor protein, reducing β-amyloid peptide and inhibiting α-synuclein. Posiphen is in Phase II clinical studies for the treatment of AD. In 2017, QR Pharma initiated a Phase I/II study to evaluate safety, tolerability, pharmacokinetics and pharmacodynamic effects of Posiphen in patients with early AD (3).

RG6100 is an anti-tau monoclonal antibody under development for the treatment of AD by AC Immune and Genentech, part of the Roche group. In 2017, Genentech started a Phase II clinical trial in AD with RG6100 to assess safety, tolerability and efficacy of this monoclonal antibody in patients with prodromal to mild AD (3).

T3D Therapeutics is developing a tau hyperphosphorylation inhibitor known as T3D959. T3D959 is currently in a phase IIa study for the treatment of mild to moderate AD. In 2016, the company reported preliminary data showing that more than half the subjects treated with T3D959 had cognitive score improvements (3).

Cortice Biosciences is developing TPI287, a novel taxoid derivative that acts by stabilizing neuronal microtubules and decreasing toxic tau aggregation (3). During the Clinical Trials on Alzheimer’s Disease conference in 2017, Cortice announced results from Phase I clinical trials evaluating TPI287 for the treatment of AD, progressive supranuclear palsy and corticobasal syndrome. The results with TPI287 in mild-to-moderate AD patients were encouraging with no change in cognitive assessment scores after a period of 12 weeks (2).

There are a few tau-targeting drug candidates in the pipeline in Phase I development. Among these candidates is an immunotherapy known as ACI-35, a liposomal vaccine containing a phosphorylated human tau protein fragment (3). AC Immune is collaborating with Janssen Pharmaceuticals to develop ACI-35 and the product is currently in a Phase Ib clinical study in patients with mild to moderate AD (6). Additional Phase I candidates are in development at other companies including sGC Pharma and Proteotech.

Tau-centric therapies have been the subject of increased interest and debate in recent years. To support researchers and organizations in their quests to develop a treatment for AD and related tauopathies, Bachem offers a selection of tau fragments, custom peptide synthesis and the production of peptide-based new chemical entities.

I started working at Bachem in October 2017. Before joining Bachem, I completed my studies in Business Administration with specialization in tourism at the Cooperative State University of Baden-Wuerttemberg in Loerrach. In these studies, you switch regularly from your academic studies at the university to practical training by your partner company. My partner company was a tourism marketing organization.

I am responsible for the organization of tradeshows, especially in Asia, internal events and for all matters relating our Corporate Gifts and Giveaways.

I like going hiking, playing volleyball and meeting my friends and family.

I like most about my job that it is very varied, no day is like the day before. I really like the team I am working with and I like being in contact with colleagues from other departments of Bachem and also with various suppliers and service providers around the world.

Great things in business are never done by one person. They’re done by a team of people.

Thank you very much Rebekka. 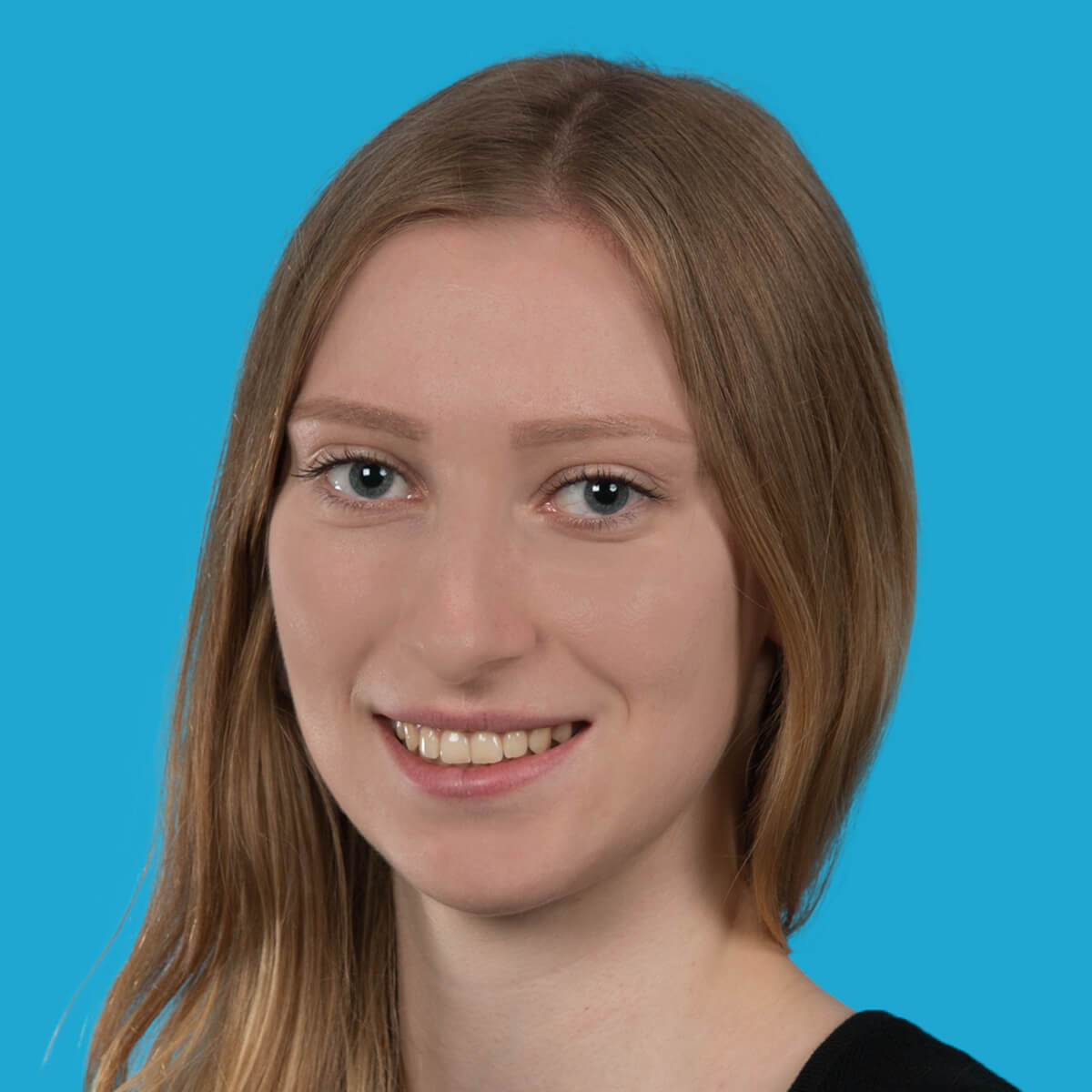