MEET US AT CPHI WORLDWIDE 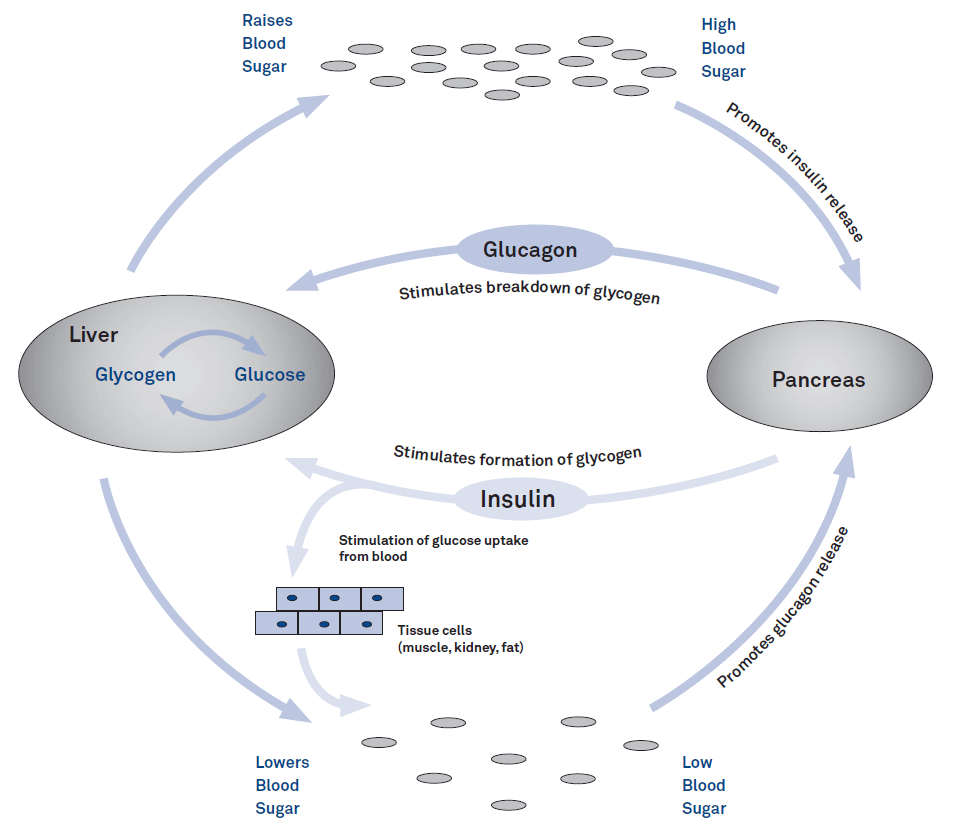 GLP-1 is derived from the product of the proglucagon gene. This gene encodes a preproprotein (see Fig. 2) that is differentially processed dependent on the tissue in which it is expressed. In pancreatic α-cells, prohormone convertase 2 action leads to the release of glucagon. In the gut, prohormone convertase 1/3 action leads to the release of several peptides including GLP- 1. Bioactive GLP-1 consists of two forms: GLP-1 (7-37) and GLP-1 (7-36) amide. The latter form constitutes the majority (80%) of the circulating GLPs. The primary physiological responses to GLP-1 are glucose-dependent insulin secretion, inhibition of glucagon secretion and inhibition of gastric acid secretion and gastric emptying.

The International Diabetes Federation distinguishes between three main types of diabetes mellitus. This division is based upon whether the ‘blood sugar problem‘ is caused by insulin deficiency or insulin resistance: Type 1 diabetes (formerly known as insulin-dependent diabetes mellitus or juvenile-onset diabetes) is a β-islet cell specific, T-lymphocyte-mediated autoimmune disorder. It is characterized by a failure of the pancreas to produce sufficient insulin. The classic symptoms are excessive secretion of urine, thirst, weight loss and tiredness. Type 2 diabetes (formerly named non-insulin-dependent diabetes mellitus or maturity-onset diabetes) is associated with insulin resistance rather than the lack of insulin as seen in type 1 diabetes. This lack of insulin sensitivity results in higher than normal blood glucose levels. The development of type 2 diabetes seems to be multifactorial. Genetic predisposition appears to be the strongest factor. Other risk factors are obesity and high caloric intake. Type 2 diabetes occurs most frequently in adults, but is being noted increasingly in adolescents as well. Type 2 diabetes develops slowly and the symptoms are usually less severe than in type 1. Gestational diabetes may be observed in non-diabetic women during late pregnancy. They develop a resistance to insulin and, subsequently, high blood glucose. This type of diabetes is probably caused by hormones produced by the placenta. The blood glucose level has to be carefully controlled as to minimize risks for mother and child, it will return to the normal value after birth.

Insulin is essential for the treatment of type 1 diabetes. Today, human insulin (produced recombinantly) is used. Most of the vascular consequences of insulin resistance are due to the hyperglycemia seen in type 2 diabetes. For this reason a major goal of therapeutic intervention in type 2 diabetes is to reduce circulating glucose levels. There are many pharmacological strategies to accomplish these goals:

1) The use of α-glucosidase inhibitors (e.g. acarbose) leads to a reduction in digestion and thereby minimizes the consequent absorption of glucose into the systemic circulation. The reduction in glucose uptake allows the pancreatic β-cells to regulate the insulin secretion more effectively. The advantage of α-glucosidase inhibitors is that they function locally in the intestine and have no major systemic action.

4) The thiazolidinediones (e.g. pioglitazone) have been proven useful in treating the hyperglycemia associated with insulin resistance in both type 2 diabetes and non-diabetic conditions. These products function as agonists for the peroxisome proliferator-activated receptor-γ (PPAR-γ). Thiazolidinediones enhance peripheral sensitivity to insulin and, to a lesser degree, decrease hepatic glucose production by binding to and activating the PPAR-γ.

5) GLP-1 analogs stimulate insulin release, inhibit glucagon secretion, slow gastric emptying and stimulate β-cell proliferation. One of the most promising GLP-1 receptor agonists is exenatide (exendin-4) which is 53% identical to human GLP-1 at the amino acid level. The main advantage of exenatide is its resistance to cleavage and inactivation by dipeptidyl-peptidase IV (DPP IV).

6) DPP IV inhibitors represent another approach for the treatment of diabetes. Sitagliptin is the first candidate of this novel class of antihyperglycemic agents that has been approved by the FDA. Alogliptin, linagliptin, saxagliptin, and vildagliptin have been approved in the USA and in various countries worldwide. These DPP IV inhibitors can be used either alone or in combination with other oral antihyperglycemic agents (such as metformin or a thiazolidinedione) for treatment of diabetes mellitus type 2.

8) Insulin therapy is also indicated in the treatment of type 2 diabetes for the management of severe hyperglycemia after failure of oral agents.

Although some of the agents described above are still in the early phases of investigation, there is little doubt that the therapy of diabetes will undergo major changes in the near future. It is important to diagnose all type 2 diabetics at an earlier stage (for example by making self monitoring of blood glucose easier) and begin treatment in an attempt to minimize the diabetes-associated complications. The identification of the genetic components of type 1 and type 2 diabetes is an important area of research, because elucidation of the diabetes genes will influence all efforts towards an understanding of the disease, its complications, and its treatment, cure, and prevention. For this reason, genomic DNA from subjects with severe insulin resistance has been screened for mutations in genes that are implicated in insulin signaling. Indeed, a mutation in the gene encoding the serine/threonine kinase AKT2 (also known as PKBβ) could be identified. AKT2 is highly expressed in insulin-sensitive tissues and has been implicated in insulin-regulated glucose uptake into muscle and fat cells by promoting the translocation of glucose transporter 4 (GLUT4) to the cell surface. Advances in genomics, proteomics and metabolomics will help us to further understand the causes of type 1 and type 2 diabetes and could eventually lead to novel therapeutic approaches.

Products for Diabetes Research in our Online Shop

There are numerous recombinant proteins in various phases of clinical development as shown in Figure 1. Several candidates are currently pending approval as shown in Table 1.

There are currently three peptide drug candidates pending approval for the treatment of type 2 diabetes as shown in Table 1. Intarcia Therapeutics has developed ITCA650, a six-month treatment that consists of a matchstick size device that utilizes the company’s Medici Drug Delivery SystemTM to provide continuous subcutaneous delivery of exenatide. In September 2017, the U.S. Food and Drug Administration (FDA) issued a Complete Response Letter (CRL) for ITCA650 and provided guidance regarding the manufacturing aspects in the CRL. Intarcia announced that the company does not foresee the need for a new pivotal trial or any long lead-time Chemistry, Manufacturing and Controls (CMC) activities to satisfy the FDA (2). Another late stage candidate awaiting approval is NN9535. Novo Nordisk has filed for regulatory approval with the FDA, the European Medicines Agency (EMA) and the Japanese Ministry of Health, Labour and Welfare for NN9535 (semaglutide), a once-weekly GLP-1 receptor agonist for patients with type 2 diabetes (3). In China, Uni-Bio Science is developing Uni-E4 (recombinant exenatide). The company has completed a Phase III clinical trial of Uni-E4 for the treatment of type 2 diabetes and the product is pending approval in China (4).

There are two candidates currently in Phase III development for type 2 diabetes as shown as Table 2. Novo Nordisk’s once-daily long-acting oral semaglutide, NN9924, is currently in Phase III trials for type 2 diabetes. The company expects that results from their Phase IIIa program, consisting of ten studies, will be available in 2018 (3). Jiangsu Hengrui Medicine is developing PEX168, a novel GLP-1 analog that consists of pegylated loxenatide. In 2014, the company initiated two Phase III studies. One study is evaluating PEX168 combined with Metformin in the treatment of type 2 diabetes and the second study is evaluating PEX168 monotherapy in the treatment of type 2 diabetes (4).

There are many peptide therapeutics in Phase II development for diabetes as shown in Table 3. Four candidates are GLP-1 receptor agonists and three candidates are novel dual agonists. For example, Eli Lilly is developing LY3298176, a hypoglycemic dual agonist of the gastric inhibitory polypeptide receptor (GIP) and GLP-1 receptor. In addition, MedImmune has a dual agonist, MEDI0382, in development for the treatment of type 2 diabetes and obesity. MEDI0382 acts as a GLP-1 and glucagon dual agonist. Similarly, Transition Therapeutics is developing TT401 for the treatment of type 2 diabetes and obesity. TT401 is a hypoglycemic oxyntomodulin peptide, which is a dual agonist of the GLP-1 (Glucagon-Like Peptide-1) receptor and glucagon receptors (4).

The early phase pipeline of peptides for type 2 diabetes is robust with fourteen known candidates as listed in Table 4. Notably, several GLP-1 receptor agonists are in Phase I development and further dual agonists are on the horizon such as BI456906, TT402 and ZP2929. Also, there are Phase I candidates in the pipeline with different mechanisms of action such as Boehringer Ingelheim’s BI473494, a long-acting amylin receptor agonist that improves glycemic control by decreasing postprandial and fasting blood glucose levels and terminal Hb1Ac levels. Additionally, CureDM is developing Pancreate, a human proislet peptide that acts by stimulating the growth of new insulin producing islets in the pancreas. In China, Shenzhen HighTide Biopharmaceutical is developing HTD4010, an analog of islet neogenesis-associated protein (INGAP) peptide (4).

The type 2 diabetes space is competitive but long-acting treatments and oral formulations offer the promise of new options to help physicians tailor treatments for patients based on their personal criteria. Efficacy, tolerability, cost and convenience may also vary among candidates in the pipeline offering additional advantages or disadvantages for patients. To support companies and organizations working in the area of diabetes, Bachem offers a wide array of catalog research peptides, custom peptide synthesis, production of peptide-based new chemical entities and generic active pharmaceuticals ingredients.