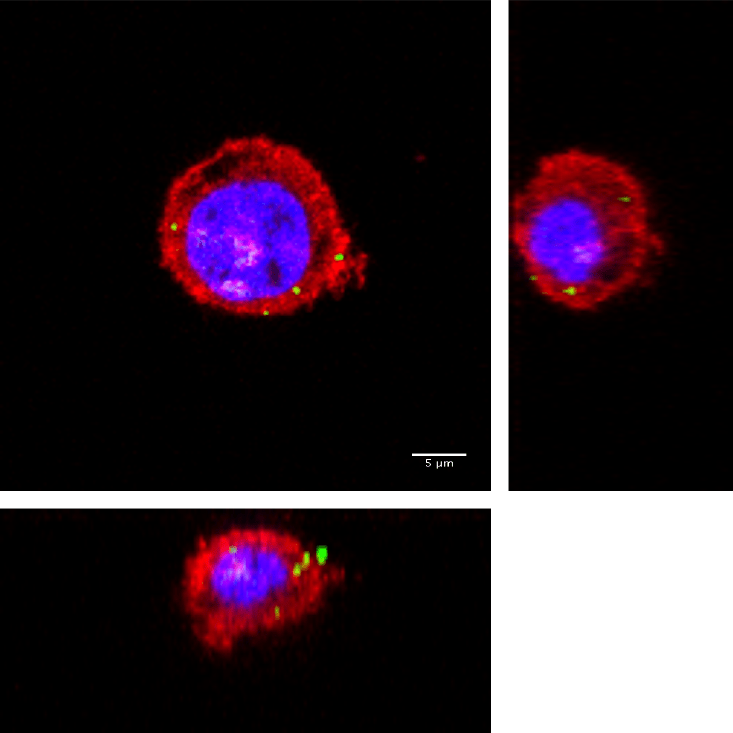 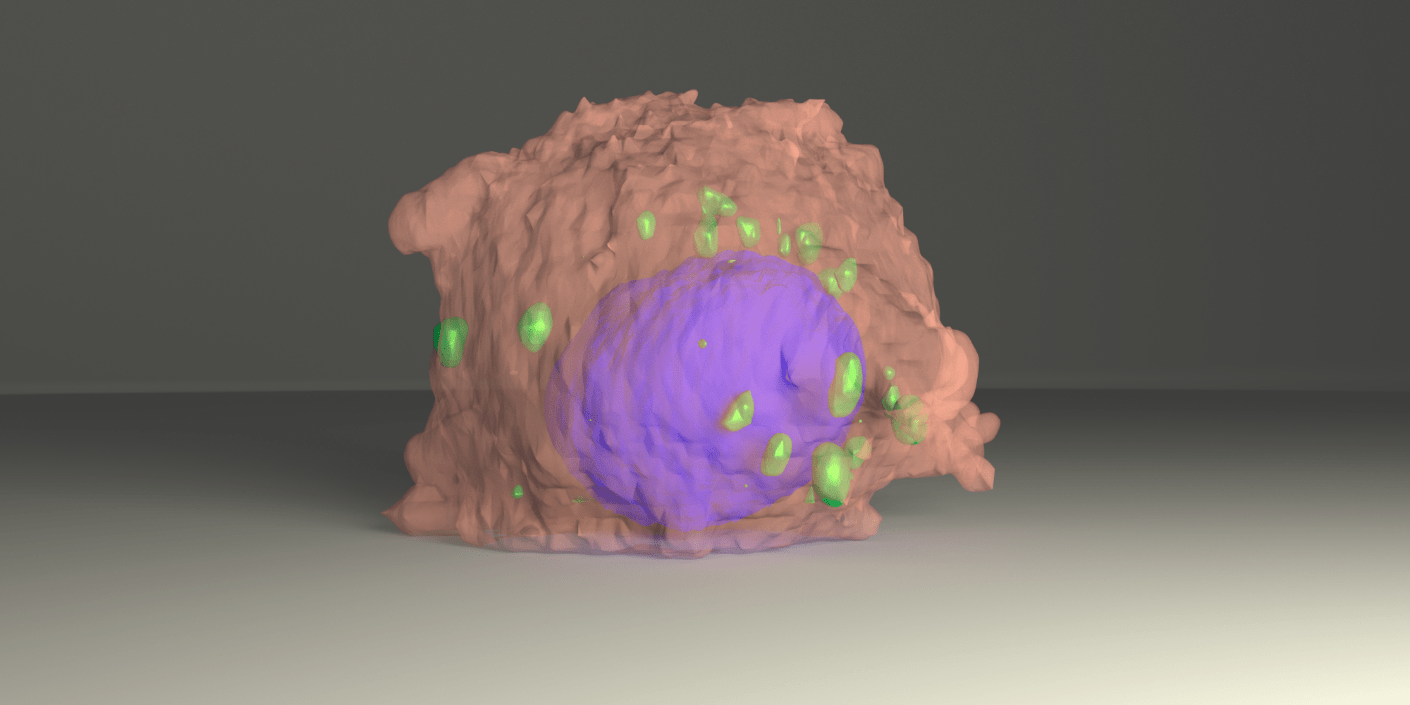 Research and clinical studies on the transport and delivery of therapeutics into cellular targets using cell-penetrating peptides has been progressing well in recent years. Several companies started working on clinical development of CPPs, for topical and systemic administration of different therapeutic molecules. The first CPP clinical trial was initiated by Cellgate Inc. for topical delivery of cyclosporine linked to polyarginine (CGC1072) and entered phase II trials in 2003 for the treatment of psoriasis. This is an example of local application of a CPP-drug conjugate (local CPP-mediated delivery). However, despite an efficient uptake of the chimera, the release of the free drug was not rapid enough to compete with clearance. A list of different CPP-based drugs which entered clinical trial is shown in Table 2. 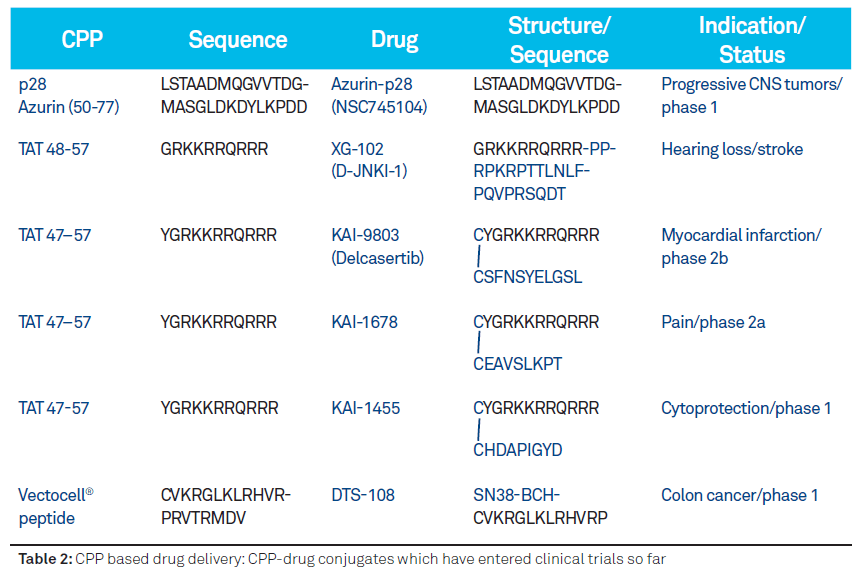 The therapeutic 28-amino acid cell-penetrating peptide p28 is derived from azurin, a redox protein secreted from the pathogen Pseudomonas aeruginosa, produces a post-translational increase in p53 by inhibiting its ubiquitination in cancerous cells. In few of these cases therapeutic agents are covalently linked either directly or through a linker to the CPP carrier. In KAI-9803, KAI-1678 and KAI-1455, the cargo peptide is attached to Tat peptide via a disulfide bond between additional cysteines at the N-termini of both entities. The cargo peptides SFNSYELGSL and EAVSLKPTC are δ protein kinase C (δPKC) and ε protein kinase C (εPKC) specific inhibitors, respectively and HDAPIGYD is a εPKC activator peptide. DTS-108 is a Vectocell® peptide-SN38 prodrug generated by esterification of the 10-hydroxyl group of SN38 to a hetero-bifunctional cross-linker (BCH) linked to Vectocell® peptide DPV1047 (CVKRGLKLRH VRPRVTRMDV).

Article by Archana Gangakhedkar, American Peptide Company (A member of the Bachem Group)

Mosquito-borne flaviviruses like West Nile (WN), Japanese B encephalitis (JE) and Saint Louis encephalitis (SLE) can be fatal, with up to 30% of mortality, and can cause permanent neurological disabilities in the survivors. With steady increase in number of infections in USA they have been categorized as category-B bioterrorism agents with no effective treatment.

There has been elevated interest in emerging new technologies to combat these infections through RNAi-(Ribo Nucleic Acid interference). The RNAi technology seems to be promising and can effectively deal with these dreadful infections. Small interfering RNAs (siRNAs) have the capacity to target a broad spectrum of fatal viral infections that have no treatment. However, poor cellular uptake and short serum half-life are major limitations to effectively use them to cure these diseases.

RVG-9R is a small cell-permeable peptide, a fragment of rabies virus glycoprotein (RVG) fused to cationic nonaarginine. The neurotropic protein RVG crosses the blood brain barrier (BBB) to infect the brain cells. The chimieric peptide RVG-9R containing an RVG fragment has retained this ability and thus can transport SiRNA molecules into the central nervous system (CNS), into neuronal cells and macrophages.

Researchers at the Paul L. Foster School of Medicine, Center of Excellence in Infectious Diseases, Texas Tech University Health Sciences Center, El Paso, Texas, USA and the Naval Research Center USA developed five different siRNAs that inhibit both WN and SLE. These groups have been able to deliver siRNA to dendritic cells and macrophages when attached to RVG-9R peptide. Experimental data showed reduced neuronal apoptosis after IV administration of RVG-9R-conjugated siRNA to mice. The lipopolysaccharide (LPS)-induced TNF-α production in macrophages in blood as well as in microglia in the brain was reduced. Manjunath and coworkers at Texas Tech University have demonstrated that the 29-mer short peptide derived from rabies virus glycoprotein allows transvascular delivery of siRNA to the CNS crossing the BBB. It was noticed that repeated administration of RVG-9R did not induce any anti-peptide antibodies nor inflammatory cytokines which makes RVG-9R a safe noninvasive tool to deliver siRNA. Investigations are ongoing to deliver siRNA using RVG-9R peptide for the treatment of arthritis.

Article by Archana Gangakhedkar, American Peptide Company (A member of the Bachem Group)

One of the major problems encountered in cell biology is the efficient transport of biomolecules across the membranes into the cells. Some of these biomolecules have to be conjugated to carrier molecules as cell-permeable peptides in order to deliver them into the intact cells.

Cell-permeable peptides or cell-penetrating peptides (CPP) are small peptide domains that can easily cross the membrane barriers and have proven to be efficient intracellular delivery system in recent years. Several peptide domains that can efficiently transport cargos as proteins or DNA across biological membranes have been identified. Most amino acids found in these peptides are either positively charged or hydrophobic which makes their sequences amphiphilic. The octadecapeptide Hel 13-5, also called pulmonary surfactant model peptide, is such a CPP. Hel 13-5, KLLKLLLKLWLKLLKLLL, contains leucine and lysine residues in the ratio of 13:5 and forms an α-helical structures once it binds to DNA. This peptide is used specifically to transfer particular genes into cells and for DNA transfection.

Hel 13-5 is internalized extremely well in HEL cells (Human erythroleukemia cell line). It is very efficient in delivering DNA: Hel 13-5 forms stable aggregates with DNA, so a covalent bond is not required for delivering it into cells. Aggregate formation with its carrier also protects the DNA molecule from degradation. The hydrophobic regions of the CPP play an important role in the disruption of endosomal membranes. They also help to prevent DNA degradation and stabilize the α-helical structure. The multiple cationic sites of Hel 13-5 (five lysine residues) are a prerequisite for acting as a CPP.

Dissolved in buffers, Hel 13-5 peptide self-associates and adopts an amphipatic structure. It binds to biomembranes with even higher affinity. Researchers confirmed by using atomic force microscopy (AFM) that Hel 13-5 transforms liposomes from spherical structure into twisted ribbon-like fibrils. The data reported by Lee et al. in J. Biol. Chem., 276, 41224 (2001) suggest that Hel 13-5 induces lipid-specific nanotubular structures. In aqueous solution, Hel 13-5 is mainly in α-helical form and monolayer state. The α-helix can be converted into a β-sheet by increasing surface pressure. This secondary structure is attributed to the formation of a surface- associated reservoir below the monolayer. This is a key function of pulmonary surfactants which is induced by an emptying of the fluid components in their monolayers. For this reason, Hel 13-5 is also used as a pulmonary surfactant model.

I have been working now for Bachem since September 2014. Prior to my Bachem time, I was working for a distributor located in Basel, Switzerland as a Global Sales and Marketing Manager for Generic API.

At Bachem, I take care of our Generic API customers in Northern Europe, Benelux, UK, Northern Africa and Middle Eastern countries. The job contains also travel activities to have the best support towards our customers and to identify new potential partners in the mentioned countries.

I have a commercial education at the School of Economics in Basel (Switzerland).

I like to play Tennis and before Handball (my active career is over). I also like to meet friends and travel around the world.

A perfect day starts for me to watch the sunrise in my garden and drink a fresh orange juice. This gives me power for the whole day.

Always being flexible, positive, and creative in a dynamic, fast paced and changing environment.

The personal contact with our partners and customers in different countries and cultures. Even I worked for more than 12 years in the pharmaceutical industry, here at Bachem, almost every day I can learn new things and this motivates me day by day.

Thank you very much Daniel. 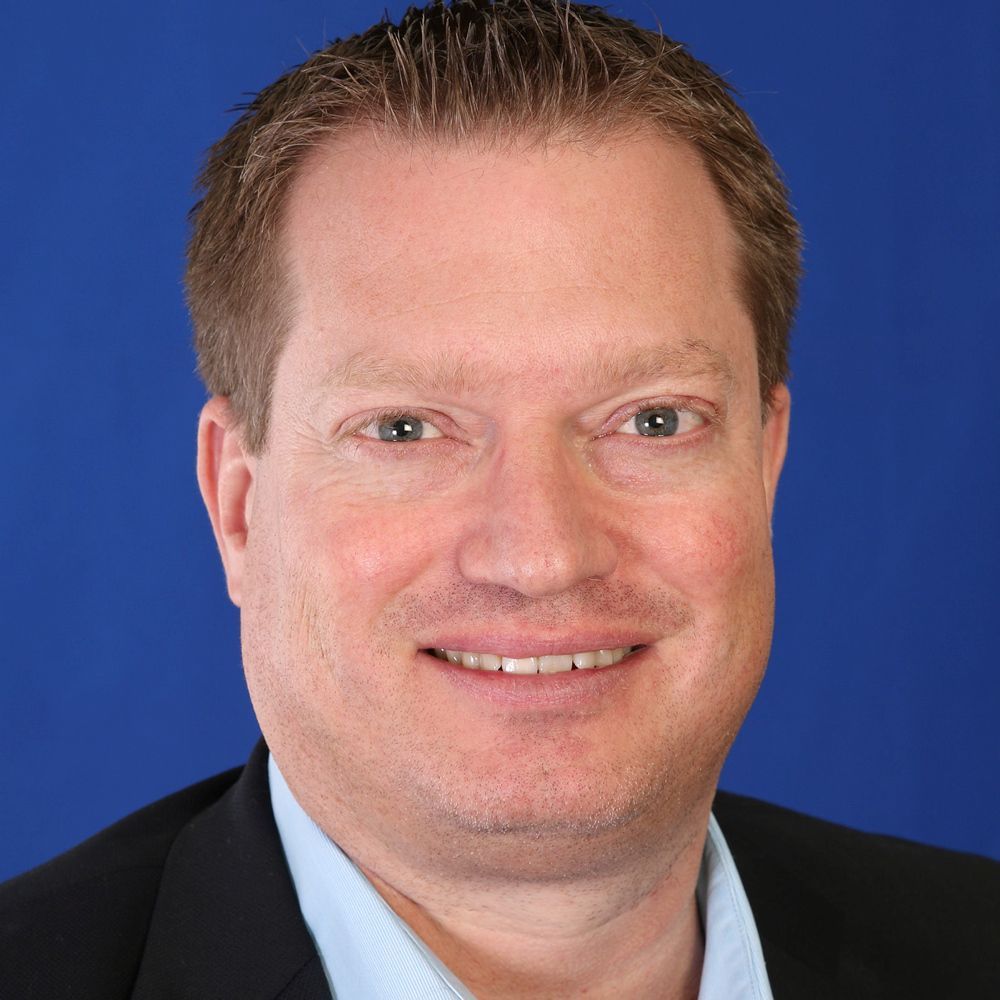