Even though both, Aβ and tau, are related to Alzheimer’s disease, studies have shown that the degree of tau related pathology correlates better with the degree of dementia than the amyloid plaque burden (1).

Tau protein is primarily expressed in neuronal cell bodies and axons and, depending on its six isoforms, has a length of 352 to 441 amino acids (1). It is used in the cerebrospinal fluid as a sensitive and specific biomarker for Alzheimer’s disease, usually determined by ELISA. Recently an LCMS method has been developed, that measures seven tryptic tau peptides (2).

A recent research publication has indicated that that the interactions of the two important fragments Aβ (25-35) and tau (273-284) affect the self-assembly process of both Aβ and tau (4).

Also trans/cis isomerization of the pThr231-Pro232 sequence in phosphorylated tau seems to play a role with Alzheimer’s disease. The cis isomer exclusively accumulates in degenerative neurons, cannot promote microtubule assembly and is more resistant to dephosphorylation. “Peptidyl-prolyl cis/trans isomerase, NIMA-interacting 1” (Pin1) converts the cis to the trans isomer to prevent Alzheimer’s tau pathology. For that, isomer-specific antibodies might be an approach for diagnosis and treatment of Alzheimer’s disease. Antibodies have been used to selectively determine both isoforms in vivo. Five different phosphorylated peptides have been used to produce and purify these antibodies (3). 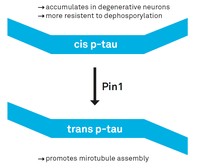 In Alzheimer’s disease (AD) and in tauopathies, a class of related neurodegenerative diseases caused by misfolding of the tau protein, the protein tau is abnormally hyperphosporylated and aggregated, leading to neurofibrillary degeneration. Tauopathies include neurodegenerative diseases such as Guam Parkinsonism–dementia complex, dementia pugilistica, corticobasal degeneration, Pick disease, progressive supranuclear palsy and others (1). Many of the drugs under development for the treatment of AD, are focused on inhibiting β-Amyloid; however, there is increased interest in developing tau-based drugs for AD and tauopathies (2). A number of approaches have come into consideration for the development of new therapeutics including inhibiting tau phosphorylation, increasing microtubule stabilization, increasing tau clearance and inhibiting tau aggregation (3).

A selection of tau-centric candidates in various phases of clinical development is shown in Table 1.

The most advanced candidate is LMTX® (methylene blue) also known as TRX0237. LMTX is being developed by TauRx Therapeutics. It acts as a neuroprotectant and inhibits tau hyperphosphorylation, dissolves tau aggregates and prevents tau aggregation. In July 2016, TauRx reported results from a Phase III trial. The study failed to meet its co-primary endpoints; however, the drug did show a benefit in patients who were not taking other Alzheimer’s drugs (4).

Axon Neuroscience SE is developing AADvac1, a vaccine containing a peptide fragment, amino acids 294 to 305 of the tau sequence, coupled to keyhole limpet haemocyanin (KLH) carrier. The vaccine is designed to stimulate patients’ immune systems to attack dysfunctional tau proteins and thereby stop the progression of AD. A Phase I clinical trial with AADvac1 was completed in 2015 and results from the study showed the vaccine to be safe and well tolerated in the assessed parameters. In addition, treatment with the vaccine induced a robust immune response and average cognition of patients remained stable (5).

Posiphen® (phenserine tartrate) is a small molecule being developed by QR Pharma. It acts by reducing tau hyperphosphorylation as well as inhibiting amyloid precursor protein synthesis, reducing β-amyloid peptide and inhibiting α-Synuclein. Posiphen is in Phase II clinical studies for the treatment of AD. In 2014, QR Pharma reported that Posiphen influences AD at an early stage to prevent the onset or diminish cognitive decline (4).

Therapeutics is developing another tau hyperphosphorylation inhibitor known as T3D959. T3D959 is currently in a phase IIa study and in July 2016, the company reported that enrollment and dosing was completed for this trial. In addition, the company received approval from the United States FDA for an open-label, 6-month extension study to the 2-week Phase IIa trial of T3D-959 (4).

Cortice Biosciences is developing TPI287, a novel taxoid derivative that acts by stabilizing neuronal microtubules and decreasing toxic tau aggregation. It is currently in a Phase I clinical trial for the treatment of AD (4).

There are several candidates earlier in the pipeline in Phase I development. One of these candidates is an immunotherapy known as ACI-35 that targets tau. ACI-35 is a liposomal vaccine containing a phosphorylated human tau protein fragment (4). In 2015, AC Immune partnered with Janssen Pharmaceuticals to develop ACI-35 and the product is currently in a Phase 1b clinical study in patients with mild to moderate AD (6). Also, AC Immune is collaborating with Genentech to develop an anti-tau monoclonal antibody, known as RG6100, for the treatment of AD (4). Additional candidates are also in Phase I development at other companies including AbbVie, Roche, Capo Therapeutics, iPerian, sGC Pharma and Proteotech.

Tau-based therapies have been the subject of increased interest in recent years. To support companies and organizations studying tau protein and its role in AD and related tauopathies, Bachem offers a selection of tau research peptides, custom peptide synthesis and the production of peptide-based new chemical entities.

How long have you been with Bachem? Where did you work before Bachem?
I started in January 2014 as a Sales Manager in Bachem and before that I worked at Novartis in the pharmaceutical research.

From September 1st I am heading the Generic Sales team in Bachem. Our group is taking care of the customers interested in our Generic API portfolio. Further we analyze new market potentials for our current API and evaluate also new possible Generic API candidates.

My training began as a lab technician in cellular and molecular biology and later I studied Life science with focus on medical engineering.

I spent most of my free time outdoor doing any kind of sports. Also I enjoy inviting friends for dinner and travelling around the world.

Our main goal is to understand the needs of our customers and to provide them with the appropriate support. This can only be ensured by constantly connecting with our customers during face to face meetings, calls or regular email exchange.

I love the variety of tasks and the interaction with our partners. Finding creative solutions to help our customers to be successful on the generic market is one of my key drivers.

Travelling around with my camper in Europe.

Thank you very much Marco. 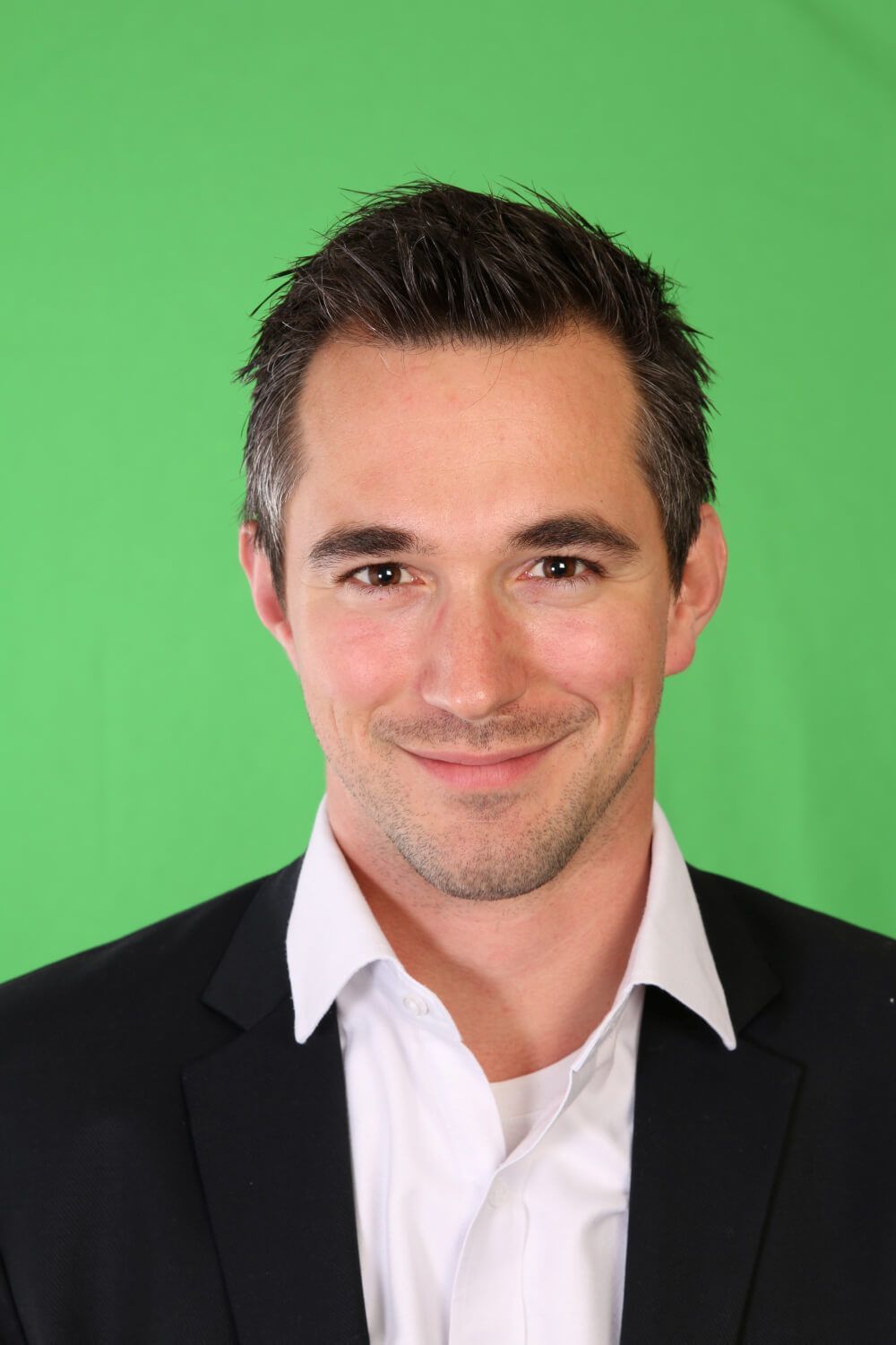