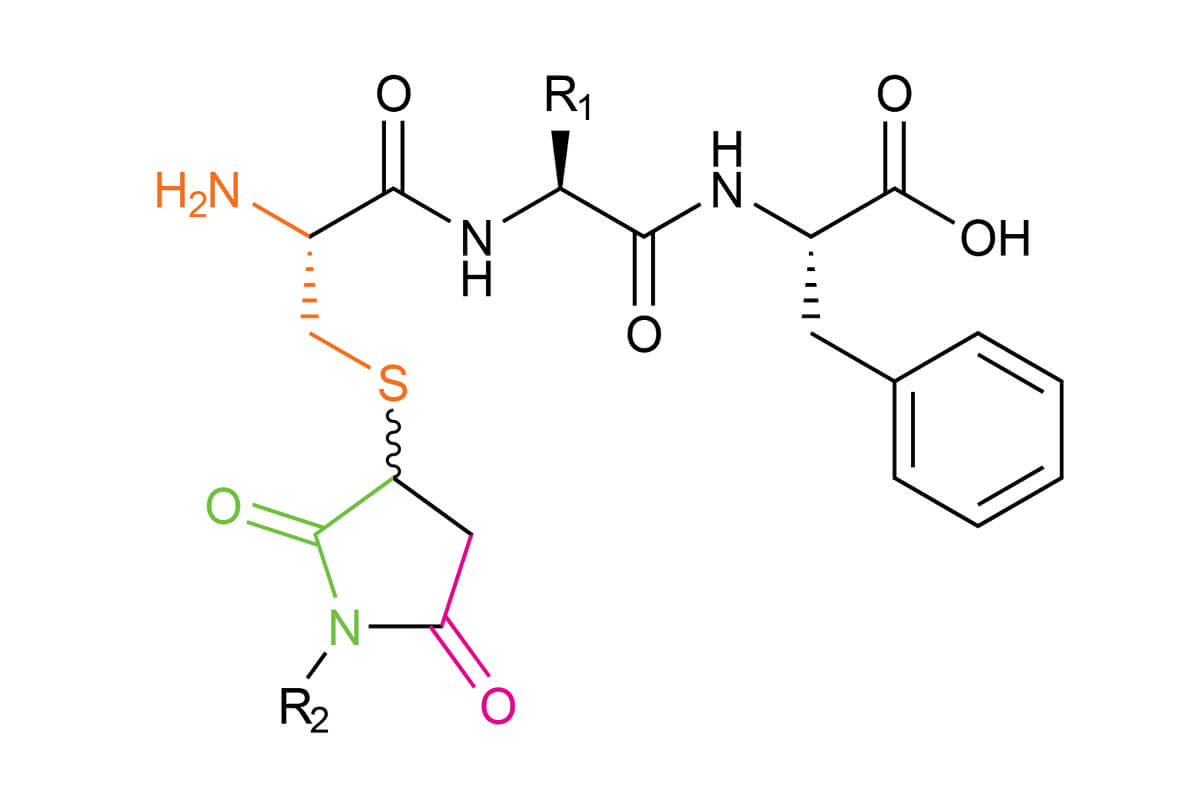 Secrets of an important byproduct revealed

At Bachem, technological leadership and strong innovation have been the cornerstones of our success since the very beginning of our company. We strive for technology and highest quality of our products. Investing in research in order to constantly improve our manufacturing process is one of our driving forces. In this context, we have studied and provided further optimized tools for one of the most widely used strategies for the covalent modification of peptides and proteins, the thiol-maleimide reaction.

In this chemical modification reaction, however, side-reactions occur and are challenging to address. Thiazine formation during the conjugation of N-terminal cysteine peptides to maleimides is one of them, and has been revealed to be underreported in peptide literature. 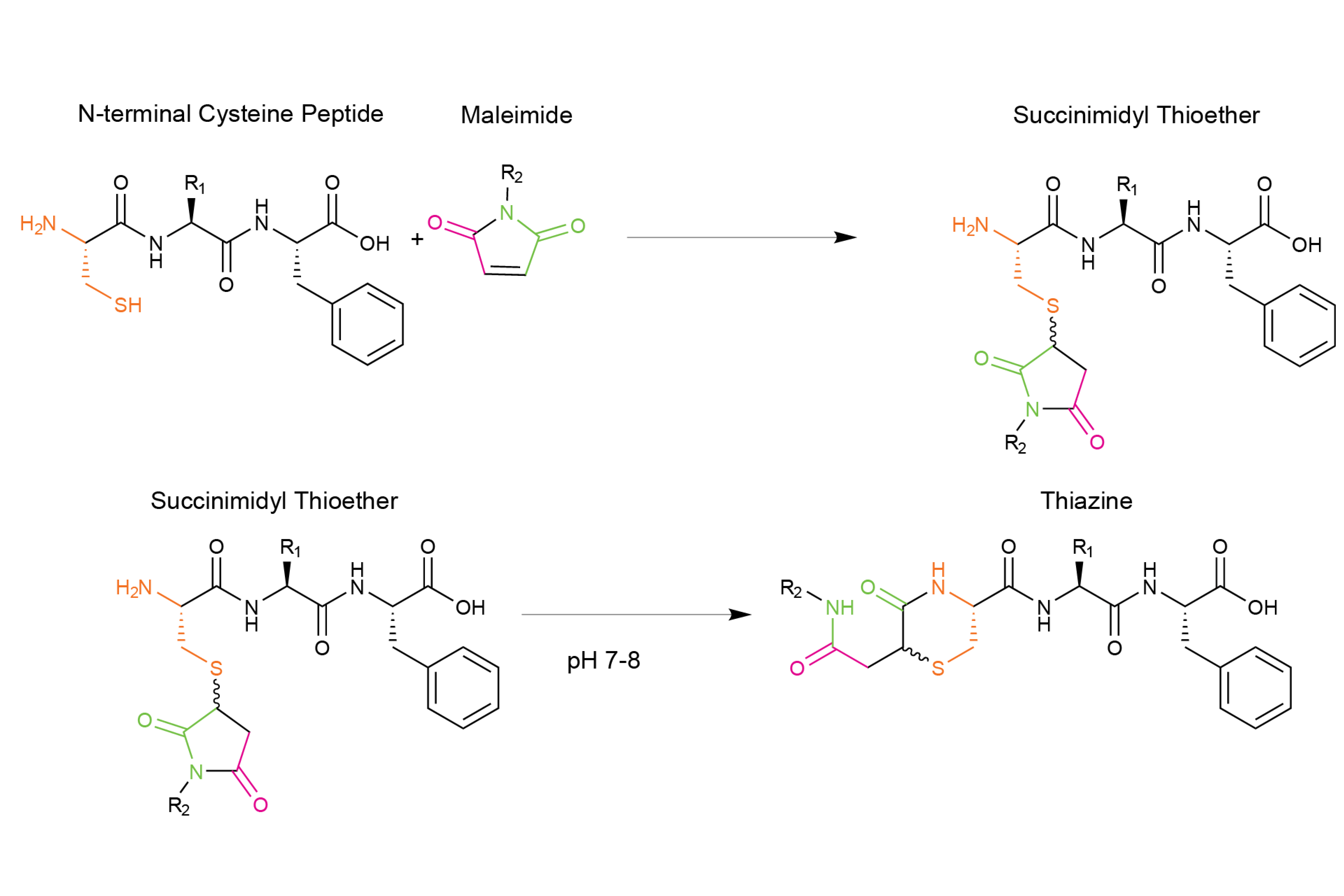 The thiol-maleimide reaction is used to add chemical labels onto biomolecules via thiol conjugation such as fluorescent dyes, PEG, radiolabels and small molecules. The advantages of this reaction are the rapid reaction speed between maleimides and thiols and the preferential chemical reaction at a neutral pH. However, various side-reactions are possible during thiol-maleimide conjugation, including thiazine rearrangement. These side-reactions are possibly explained by the instability of the maleimide-cysteine conjugate.

We have published a new study in the Journal of Peptide Science about thiazine rearrangement. Formation of the thiazine impurity (Scheme 1) can complicate the purification, characterization and storage of peptide conjugates leading to loss of product. This is why it is so important to investigate the mechanism. This study aimed to better understand this side-reaction and to develop tools that will prevent its formation. The thiazine side-reaction occurs during the conjugation of a maleimide with an unprotected N-terminal cysteine amino acid and leads to a thiazine derivative. 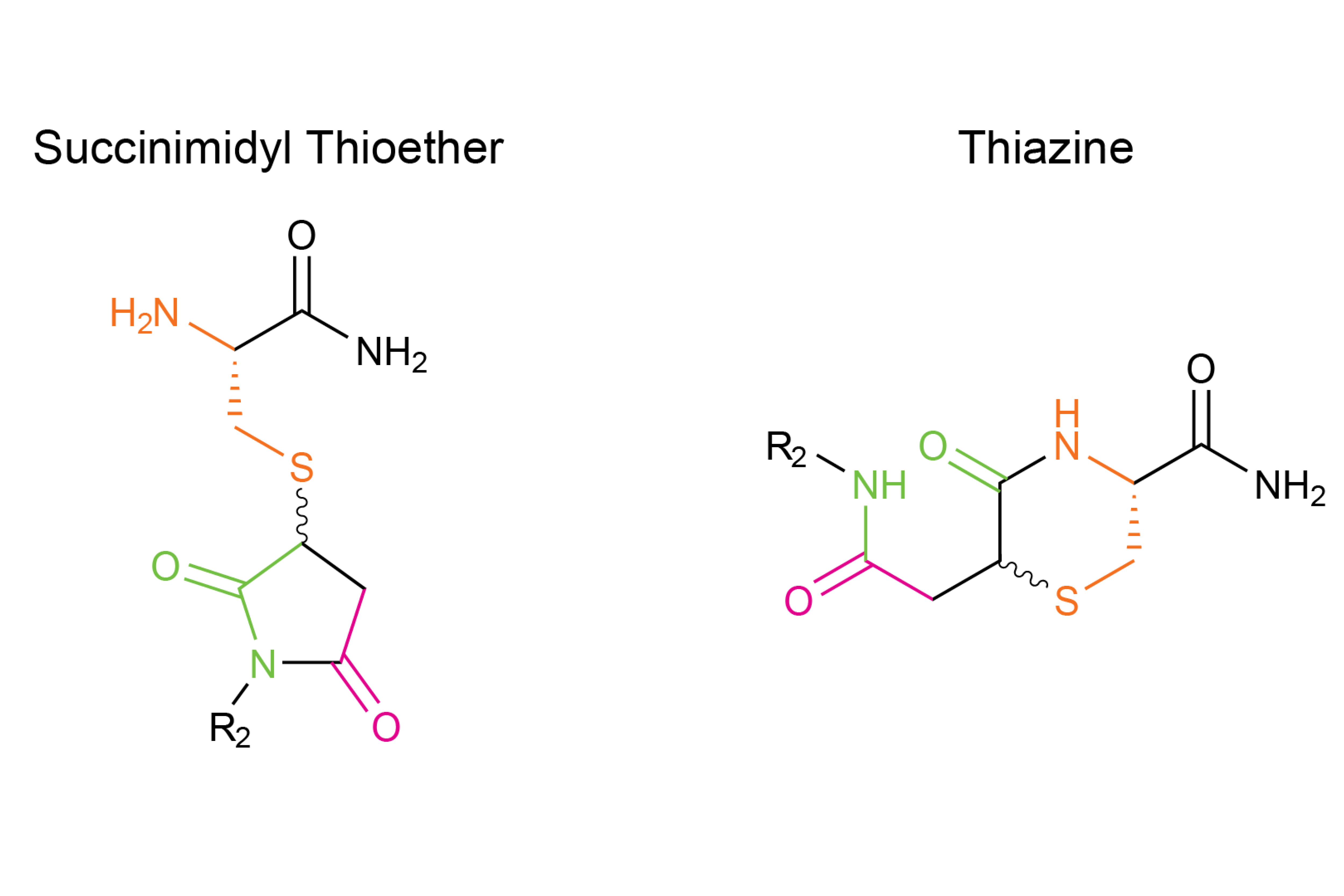 For peptides that are conjugated to maleimides through an N-terminal cysteine, the resulting succinimide is susceptible to nucleophilic attack from the N-terminal amine of the cysteine. This nucleophilic attack can occur at the carbonyl at Position 1 or the carbonyl at Position 3 (Scheme 2). Transcyclization occurs through a fused bicyclic tetrahedral intermediate, which allows for the formation of a six-membered thiazine product. 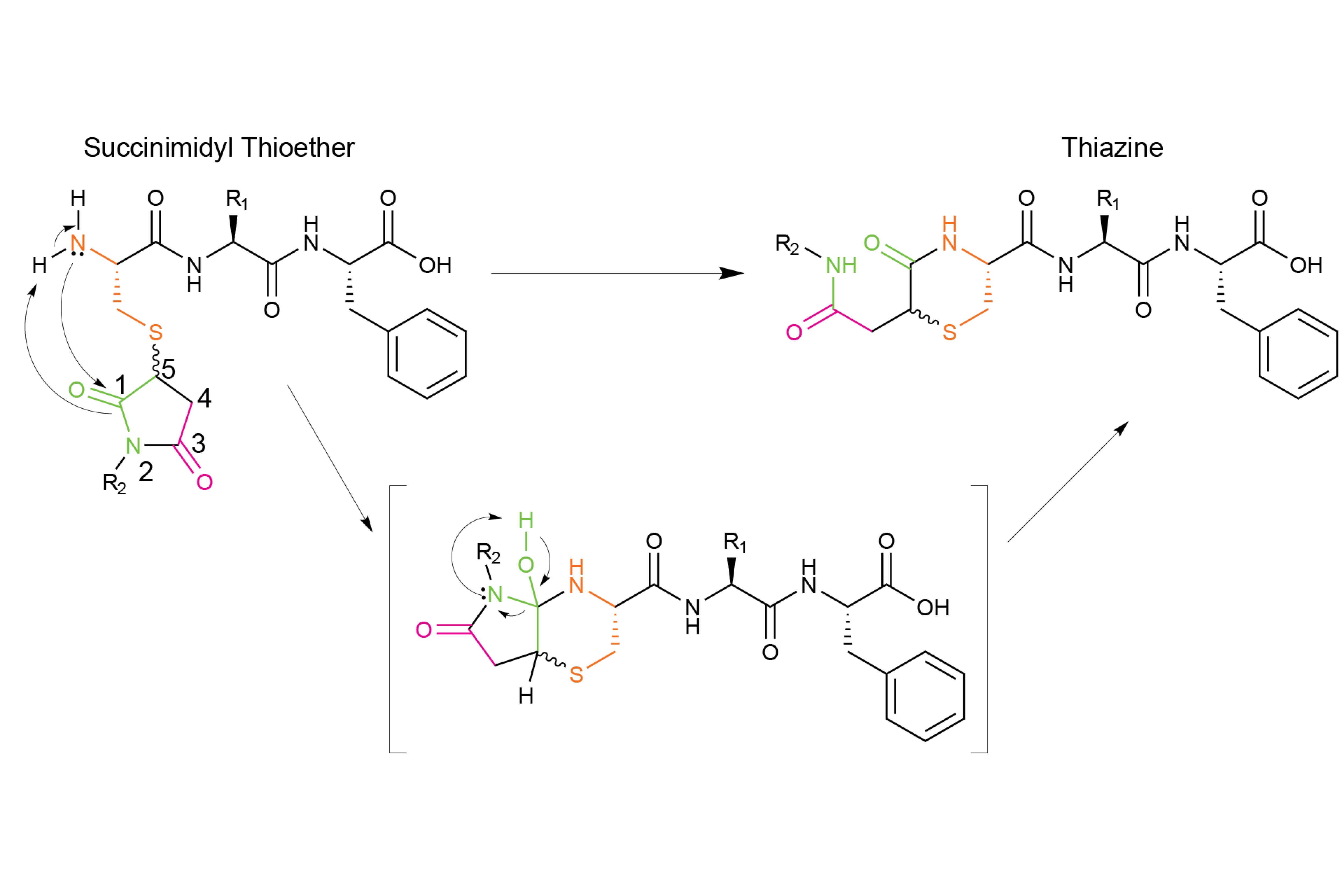 Scheme 3 – Mechanism of the Thiazine formation

As you can see in scheme 2, the thiazine side reaction is formed after nucleophilic attack of N-terminal amine at the carbonyl of the succinimide leading to the intermediate product. Then a trancyclization occurs to give a six-membered ring product.

To investigate wether or not this reaction is general, we studied the pH dependence and the sequence dependence of succinimidyl thioether to thiazine side-reaction using a tripeptide model system.

Then, when the amino acid adjacent to the N-terminal cysteine was substituted for various amino acids, we observed generation of the thiazine impurity in all instances, though the rates of thiazine formation differed for the tripeptides that were studied. Even using a maleimide linker that we anticipated to be more stable resulted in substantial thiazine formation, which provides additional support that the side reaction is general. The presence of thiazine has been confirmed through different analytical method.

Understanding the side-reactions in peptide chemistry is of utmost importance for peptide API production. By conducting this study, we believe we are providing to our customers and to the peptide community at large an important insight that will help save resources during development. This is why we conducted this study and are very satisfied with these results.

This is an exciting and novel result, which is important to keep in mind if you work with peptides, peptide-dyes, conjugates and peptide-payload conjugates, and is important for the production of peptide active pharmaceutical ingredients (APIs), used in drugs helping patients worldwide. If you would like to find out more about this interesting research, read the full journal publication.

If you want to learn even more on how to address the thiazine side-reaction, discover our webinar video:

Bachem is a leading, innovation-driven company specializing in the development and manufacture of peptides and oligonucleotides.
With over 50 years of experience and expertise Bachem provides products for research, clinical development and commercial application to pharmaceutical and biotechnology companies worldwide and offers a comprehensive range of services.
Bachem operates internationally with headquarters in Switzerland and locations in Europe, the US and Asia. The company is listed on the SIX Swiss Exchange.

← Changes to the Bachem CEC and strengthening of the US organization Bachem in Oligonucleotides: Interview with Seamus White →