Meet us at Biofit

We look forward to e-networking with the BioFIT participants, learn about their current needs for peptides and oligonucleotides and discuss how Bachem can be a partner for their future API development and manufacturing projects.

We look forward to e-connecting with you at BioFIT 2020!

Liraglutide is a GLP-1 receptor (GLP1R) agonist used to treat diabetes mellitus type 2 (T2D) and obesity. The FDA initially approved it in 2010 as a treatment of T2D and as a therapy for weight loss in addition to diet and physical exercises. GLP1R agonists stimulate insulin secretion and inhibit glucagon secretion. Furthermore, they inhibit gastric emptying and promote satiety, leading to an overall control of body weight. As part of a new generation of GLP1R agonists, liraglutide exhibits a protracted pharmacokinetic profile, suitable for once-daily administration. The drug product is supplied as a solution for subcutaneous injection containing 6.0 mg/ml of the drug substance presented in a pre-filled, multi-dose pen-injector. Furthermore, it is better tolerated by the patients compared to former GLP1R agonists such as exenatide.

The drug substance, liraglutide, is a long acting analog of the naturally occurring human GLP-1 (7-37) with 97% homology and a lipophilic substituent for prolongation of half-life to 13 hours following subcutaneous administration. In addition, it offers a better resistance to Dipeptidyl-Peptidase 4 (DDP4)-mediated degradation. Compared to GLP-1, in liraglutide lysine at position 34 has been replaced with arginine, and palmitic acid has been attached via glutamoyl spacer to lysine at position 26 [1]. 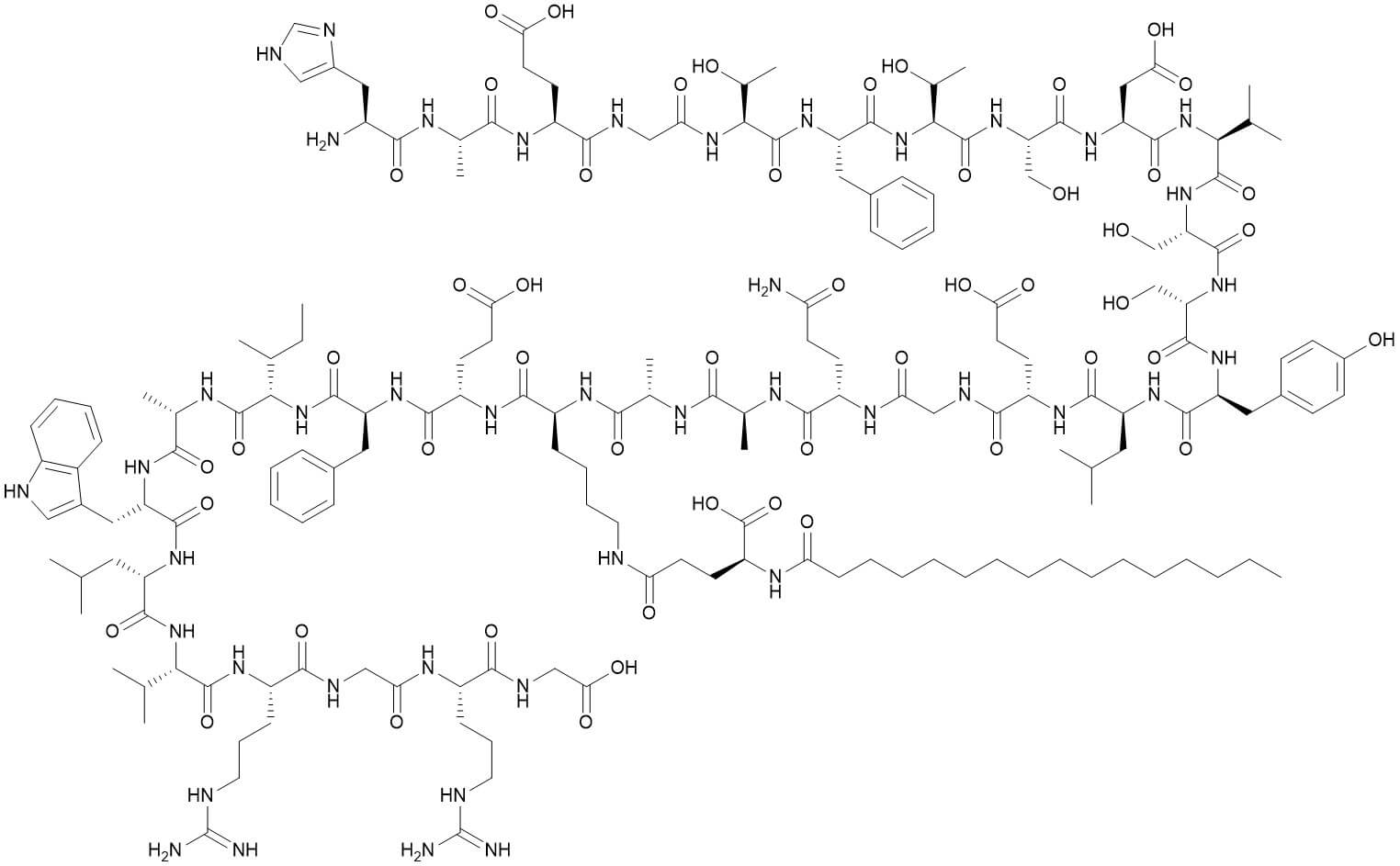 GLP1R is a receptor protein found on β-cells of the pancreas, in the gastrointestinal tract, heart, lungs, kidneys, and on neurons of the brain [2]. It is involved in the control of the blood sugar level by enhancing insulin secretion. When activated, GLP1R couples to G proteins and stimulates the adenylyl cyclase pathway, which results in increased insulin synthesis and release of insulin. GLP1R causes weight loss, and is an important pharmacological target in type 2 diabetes. GLP-1 analogs act on the GLP1R to promote β-cell survival and expand β-cell mass, evidence for durability of glucose control with prolonged clinical use. However, the GLP-1 peptide hormone has a very short half-life in circulation. In attempts to prolong the half-life of GLP-1 and GLP-1 analogs in order to develop a suitable compound for therapeutic use, the Human Serum Albumin (HSA) has been envisioned for the systemic transport of these peptides. A feature of HSA of particular interest is its ability to bind to a variety of components in plasma, thereby facilitating the solubility and transportation of insoluble substrates, such as fatty acids and steroids. Therefore, fatty acids have been conjugated to prolong the duration of peptides in blood circulation. To optimize the systemic transport of the GLP1R agonists through reversible albumin binding, a bunch of fatty acids and linker combinations have been screened. Ultimately, some have been identified to maximize albumin binding while maintaining GLP1R potency. These new findings have been incorporated into GLP1R agonist development and have led to liraglutide.

Additionally, the reversible binding to albumin, or direct steric hindrance of the fatty chain allows liraglutide a partial protection from rapid DPP4 degradation, despite the His-Ala N-terminal being unchanged compared to GLP-1 [3] and allows a delayed subcutaneous absorption [4].

As already mentioned, GLP-1 is a physiological mediator of satiety and regulates energy absorption and disposal. In the central nervous system, GLP-1 has been shown to suppress food intake. Furthermore, it is a potent stimulator of insulin release in pancreas and has the ability to render pancreatic β-cells glucose-competent. Since the time that liraglutide was first approved by the EMA in 2009 and the FDA in 2010, its range of applications has continuously expanded. Liraglutide is now prescribed for treatment of obesity, in addition to treatment of T2D for adults with a body mass index (BMI) of 30 or greater (obesity) or a BMI of 27 or greater (overweight) and has been lately approved as a treatment for children of 10 years or older with T2D. This makes liraglutide the first non-insulin drug approved to treat T2D in children in almost 20 years since metformin was approved in 2000. Unfortunately, according to the World Health Organization, T2D is becoming increasingly more common in children and young adults.

Liraglutide, a glucagon-like peptide-1 (GLP-1) receptor agonist, is the active pharmaceutical ingredient in Novo Nordisk’s blockbuster once-daily injectable Victoza. This drug received its first marketing authorization in 2009 from the European Commission for the treatment of type 2 diabetes in adults and the U.S. Food and Drug Administration (FDA) approved Victoza in 2010. With 2019 sales of DKK 21,934 million, Victoza is marketed in the United States, Europe and other regions [1]. In 2017, the FDA approved a new indication for Victoza, for reducing the risk of major adverse cardiovascular events in adults with type 2 diabetes and established cardiovascular disease. Last year, the FDA approved an expanded indication for Victoza for the treatment of type 2 diabetes in children and adolescents aged 10-17 years old [2]. Victoza is also in the Phase II stage of development for Parkinson’s disease. In 2016, the company initiated a Phase II trial to test the efficacy and safety of liraglutide in patients with Parkinson’s disease [3].

Novo Nordisk’s also markets Saxenda, a drug containing the same active ingredient (liraglutide) as Victoza but at a different dose. Saxenda received its first approval in 2014 from the U.S. Food and Drug Administration as a treatment option for chronic weight management in addition to a reduced-calorie diet and physical activity. For this obesity care drug, Novo Nordisk reported 2019 sales of DKK 5,679 million. The drug is also in Phase II development for smoking cessation and nicotine addiction. In 2018, the company initiated a Phase II trial to study the effects of liraglutide on smoking behavior, food intake, and weight gain [4].

Additional companies have entered into clinical development with liraglutide drug candidates as shown in Table 1.

Zhuhai United Laboratories is developing liraglutide injection for the treatment of type 2 diabetes. The company registered a Phase III study with the Chinese Clinical Trial Registry in June 2020 and the trial is currently in progress to compare the effectiveness and safety of the Zhuhai United Laboratories liraglutide injection in the treatment of type 2 diabetes [1].

Hangzhou Jiuyuan Gene Engineering is also developing liraglutide injection. The company has liraglutide in the Phase III stage of development for the treatment of type 2 diabetes and Phase II stage of development for obesity. The company registered a Phase III trial with the China Clinical Trial Registry to compare injection solutions of liraglutide and therapeutic safety and efficacy for type 2 diabetes [1].

In addition, three companies have filed an Investigational New Drug Application (IND) with regulatory authorities in order to begin trials with liraglutide for the treatment of type 2 diabetes. In September 2020, Beijing SL Pharmaceutical received a “Drug Clinical Trial Approval Letter” for liraglutide injection issued by the National Medical Products Administration (NMPA) in China. The company registered a Phase I trial in China but it is not yet recruiting for the trial. A second company, Sino Biopharmaceutical, has filed an IND for liraglutide with the NMPA. Levim Biotech is also developing liraglutide for the treatment of type 2 diabetes. In July 2020, Levim Biotech registered a Phase I trial with the Clinical Trial Registry of India, which is not yet recruiting. The study will compare single and multiple dose pharmacokinetics profiles of biosimilar liraglutide with Victoza in healthy subjects [1].

Growing from the active pharmaceutical ingredient in a diabetes drug to a weight loss medication, liraglutide has been successful and there are new potential indications on the horizon. To support pharmaceutical and biotech companies developing peptide therapeutics, Bachem offers the production of New Chemical Entities and a portfolio of generic Active Pharmaceutical Ingredients.

3. Safety and Efficacy of Liraglutide in Parkinson’s Disease. ClinicalTrials.gov 2020.

I have been working at Bachem since the beginning of this year. Before that, I enjoyed my time as a Postdoctoral Fellow in the beautiful city of Vancouver.

Within the MDM team, we are responsible for maintaining master data in our ERP system. This includes the creation of new material, customer and vendor numbers as well as the implementation of changes concerning these data. Ensuring a consistent Bachem nomenclature and assigning correct harmonized system codes are also part of our daily tasks. 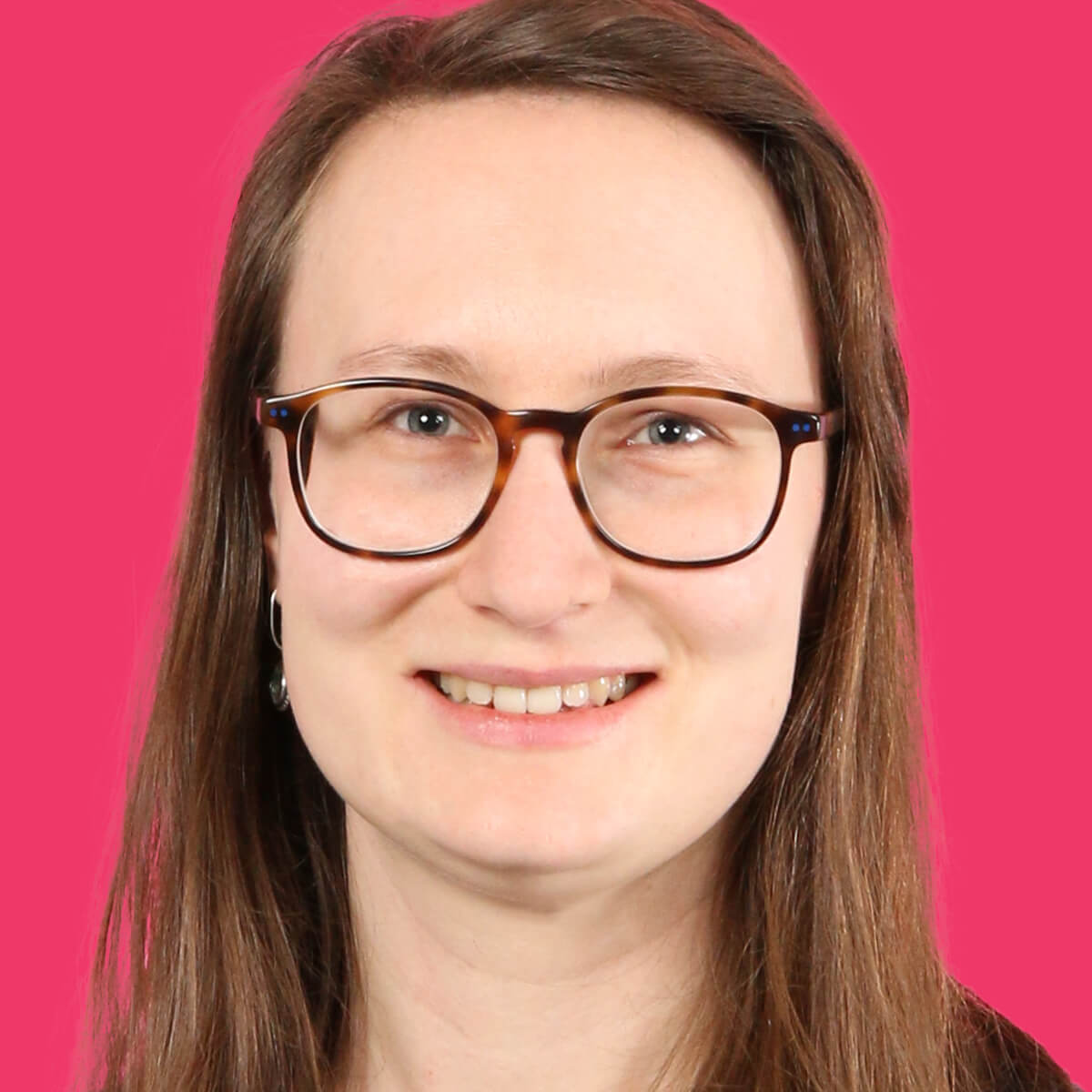 I obtained a PhD in Chemistry from the University of Basel, focusing on the development of organometallic complexes for lighting applications.

“What’s the motto with you? MDM is always here to help!”

Having the opportunity to work in a great and supportive team and learning new things every day.

Depending on the weather, this can range from watching movies to skiing, reading to bouldering or pole dancing to gardening.

Could a lasso-shaped drug blend the best of antibodies and small molecules? Lassogen banks $4.5M to get started-Fierce Biotech

Bachem peptides and biochemicals are widely cited in research publications. Congratulations to all our customers with recent publications!