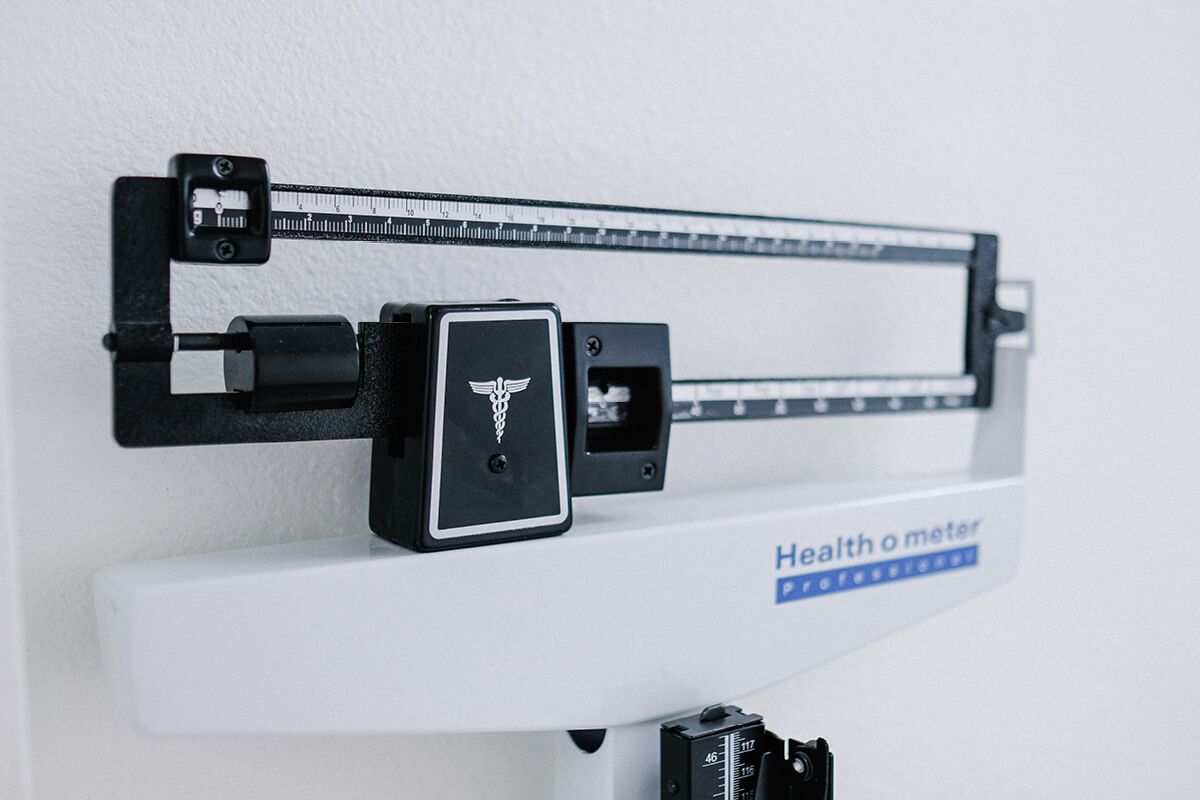 Liraglutide, an active pharmaceutical ingredient (API) in our commercial generics pipeline, is a GLP-1 receptor agonist and used to treat diabetes mellitus type 2 and obesity. It was initially approved by the FDA in 2010 as a treatment of type 2 diabetes (T2D) and as a therapy for weight loss in addition to diet and exercise. The GLP-1 receptor agonists stimulate insulin secretion and inhibit glucagon secretion. Furthermore, they inhibit gastric emptying and promote satiety, leading overall to control of body weight. As a new generation of GLP-1 receptor agonists, liraglutide exhibits a protracted pharmacokinetic profile, suitable for once-daily administration. The drug product is a solution for subcutaneous injection containing 6.0 mg/ml of the drug substance presented in a pre-filled, multi-dose pen-injector. Furthermore, it is better tolerated by the patients compared to former GLP-1 receptor agonists such as exenatide.

Fatty acid modified to enhance the half-life in the body

The drug substance, liraglutide, is a long acting analog of the naturally occurring human GLP-1(7-37) with 97% homology and a lipophilic substituent for prolongation of half-life to 13 hours following subcutaneous administration and offer a better resistance to Dipeptidyl-Peptidase 4 (DDP4)-mediated degradation. Compared to GLP-1, in liraglutide lysine at position 34 has been replaced with arginine, and palmitic acid has been attached via glutamoyl spacer to lysine at position 261J. Med. Chem. 43, 1664–1669 (2000). 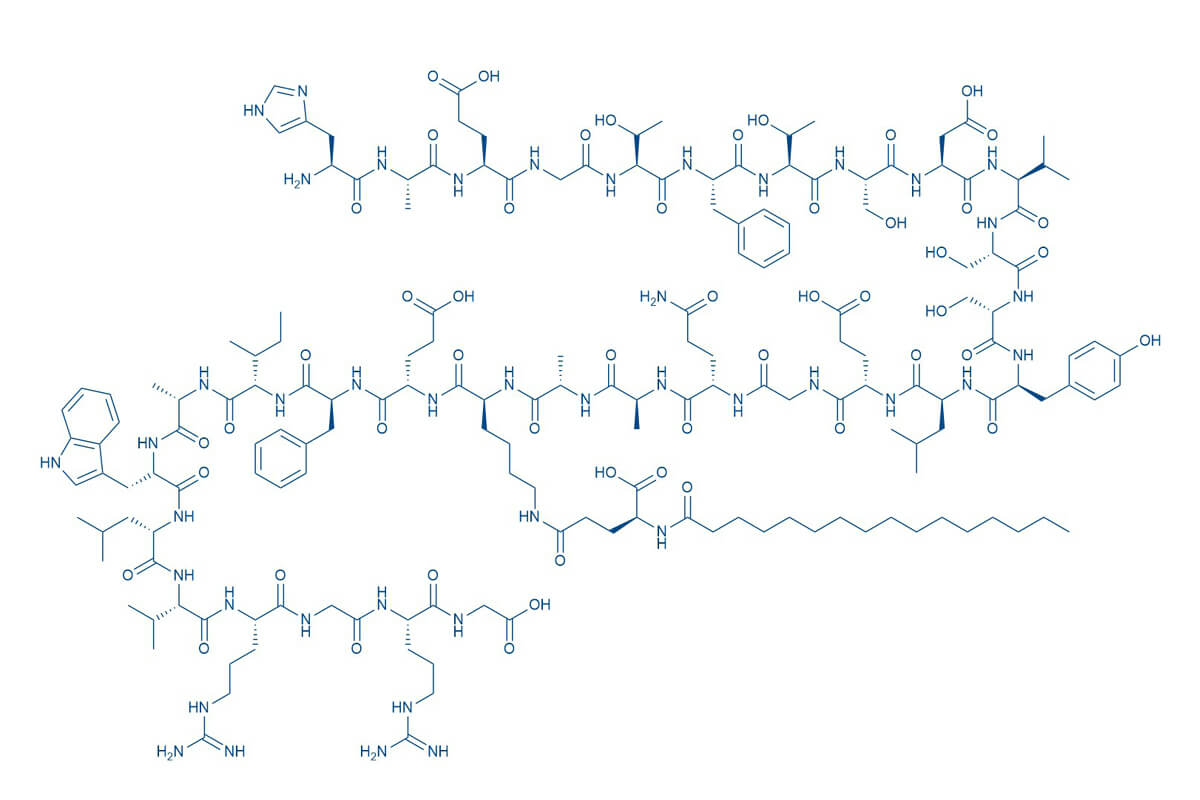 The glucagon-like peptide-1 receptor (GLP1R) is a receptor protein found on β-cells of the pancreas, gastrointestinal tract, heart, lungs, kidneys, and on neurons of the brain2Proc. Natl. Acad. Sci. U. S. A. 89(18), 8641–8645 (1992). It is involved in the control of the blood sugar level by enhancing insulin secretion. When activated, GLP1R couples to G proteins and stimulates the adenylyl cyclase pathway which results in increased insulin synthesis and release of insulin. GLP1R causes weight loss, and is an important pharmacological target in type 2 diabetes.
GLP-1 analogs act on the GLP1R to promote β-cell survival and expand β-cell mass, evidence for durability of glucose control with prolonged clinical use. However, the GLP-1 peptide hormone has a very short half-life circulation. In attempts to prolong the half-life of GLP-1 and GLP-1 analogs in order to develop a suitable compound for therapeutic use, the Human Serum Albumin (HSA) has been envisioned for the systemic transport of these peptides. A feature of HSA of particular interest is its ability to bind to a variety of components in plasma, thereby facilitating the solubility and transportation of insoluble substrates, such as fatty acids and steroids. Therefore, fatty acids have been conjugated to prolong the duration of peptides into blood circulation. To optimize the systemic transport of the GLP-1 receptor agonists through reversible albumin binding, a bunch of fatty acids and linker combination have been screened. Ultimately some have been identified to maximize albumin binding while maintaining GLP-1 receptor (GLP-1R) potency. These new findings have been incorporated to the GLP-1 receptor agonist and have led to liraglutide.
Additionally, the reversible binding to albumin, or direct steric hindrance of the fatty chain allows liraglutide a partial protection from rapid DPP4 degradation, despite the His-Ala N-terminal being unchanged compared to GLP-13Drug. Metab. Dispos. 38, 1944–1953 (2010) and allows a delayed subcutaneous absorption4Diabetes. 57, A164 (2008).

As already mentioned, GLP-1 is a physiological mediator of satiety and regulates energy absorption and disposal. In the central nervous system GLP-1 has been shown to suppress food intake. Furthermore, it is a potent stimulator of insulin release in pancreas and has the ability to render pancreatic β-cells glucose-competent. Since Liraglutide has been first approved by the EMA in 2009 and the FDA in 2010, its range of application never stopped expanding. Liraglutide is prescribed as treatment of obesity, in addition to treatment of type 2 diabetes for adults with a body mass index (BMI) of 30 or greater (obesity) or a BMI of 27 or greater (overweight) and has been lately approved as a treatment for children of 10 years or older with type 2 diabetes. It makes Liraglutide the first non-insulin drug approved to treat type 2 diabetes in children since metformin was approved in 2000. Unfortunately, according to the World Health Organization, type 2 diabetes is becoming increasingly more common in children and young adults.